Around six-in-ten U.S. adults (63%) say the nation’s economic system unfairly favors powerful interests, compared with a third (33%) who say it is generally fair to most Americans, according to a new Pew Research Center survey. While overall views on this question are little changed in recent years, the partisan divide has grown.

And while wide majorities of Democrats and Democratic leaners have long said that the U.S. economic system unfairly favors powerful interests, the share who say this has increased since 2016 – from 76% then to 84% today. 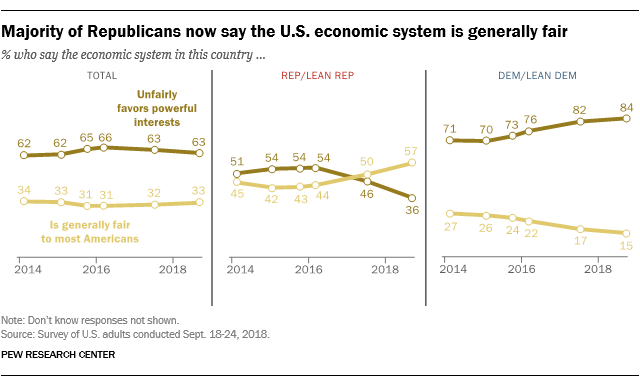 Partisan differences extend to beliefs about why people are poor or rich.

Democrats and Democratic leaners are more likely to say the reason someone is poor generally has more to do with circumstances beyond their control (69%) than with a lack of effort (18%). Among Republicans and Republican leaners, a larger share says a person is poor more because of a lack of effort (48%) than because of circumstances beyond an individual’s control (31%).

Among U.S. adults overall, 52% point to circumstances beyond a person’s control, while 31% say it is a lack of effort on his or her part; 12% volunteer both are equal contributors. 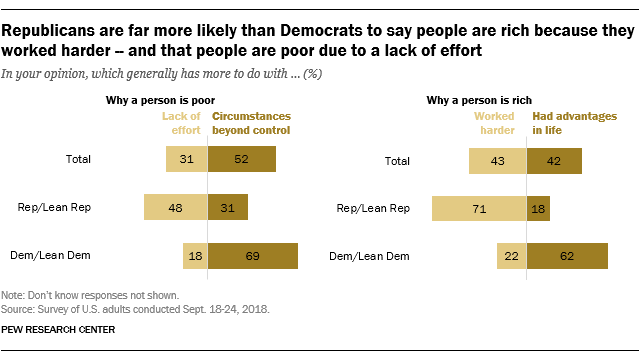 Among Republicans, there is a substantial ideological divide on this question: Nearly eight-in-ten conservative Republicans and Republican leaners (79%) say a person is more likely to be rich because they worked harder, compared with 49% among moderate and liberal Republicans. There is a more modest ideological gap among Democrats. 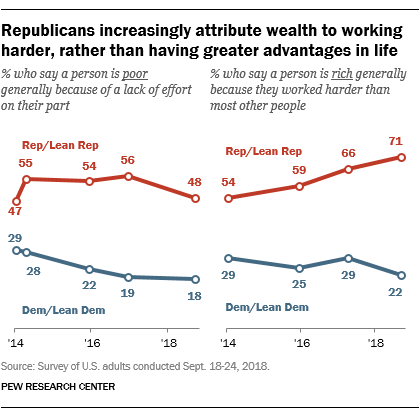 While Republicans have long been more likely than Democrats to attribute someone’s wealth to hard work, the partisan gap on this question has roughly doubled (from 25 to 49 percentage points) in the last four years.

The share of Republicans who attribute wealth more to hard work has steadily increased since 2014, from 54% to 71%. In the same time frame, there has been a more modest 7-percentage-point shift in the other direction among Democrats.

Views of why some people are rich and poor also vary by family income. Those with annual family incomes of $75,000 or more are more likely than those with incomes of less than $30,000 (49% vs. 36%) to say being wealthy is more attributable to hard work than to a person’s advantages. Those with lower incomes, in turn, are more likely than those with higher incomes to say a person is poor more because of circumstances beyond their control than because of a lack of effort. 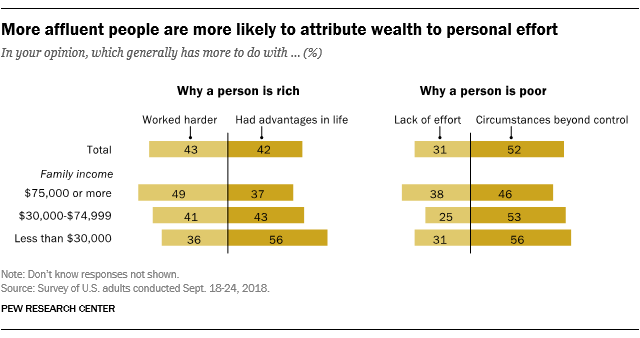 Correction: An earlier version of this blog post incorrectly cited the time span in which the partisan gap on views of the reasons why a person is rich roughly doubled.