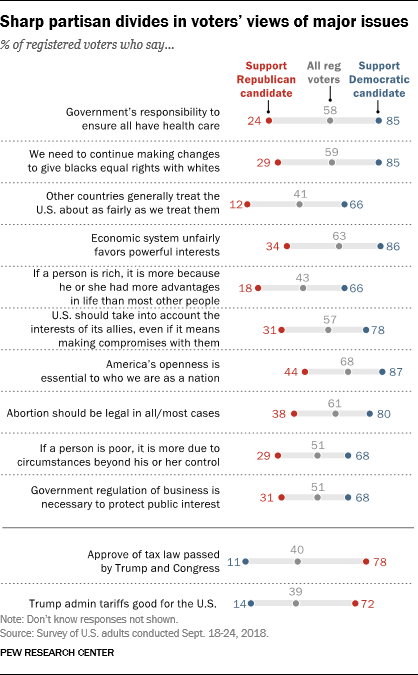 Supporters of Republican and Democratic candidates in the upcoming congressional election are deeply divided over the government’s role in ensuring health care, the fairness of the nation’s economic system and views of racial equality in the United States.

And these disagreements extend to how the U.S. should approach allies and whether or not other countries “often take advantage of the United States.”

The latest national survey by Pew Research Center, conducted Sept. 18-24 among 1,754 adults, including 1,439 registered voters, finds wide differences in the views of Republican and Democratic voters across 13 different issues and policy areas, though the size of the partisan gaps vary.

The partisan gaps on many of these values and issues are in line with those seen in previous Pew Research Center reports, including in last year’s major report on trends in the public’s political values. That study found that the partisan gaps across a number of political values – especially on race and immigration – have widened over the past decade. In the new survey, 85% of Democratic voters say the country needs to continue to make changes to give blacks equal rights with whites, compared with 29% of Republican voters.

There also are significant gaps on views of whether abortion should be legal, the factors that make people rich and poor and the fairness of the U.S. economic system.

Two specific Trump-era policies – increased tariffs between the U.S. and its trading partners, and the 2017 tax bill – are viewed much more positively by GOP voters than by Democratic voters. Overall views of the tax law remain largely unchanged from early this year: In the new survey, 78% of voters who support the GOP candidate in their district approve of the tax law, compared with just 11% of Democrats.

And the partisan differences are about as wide in views of the Trump administration’s decision to increase tariffs on imported goods from a number of countries. Nearly three-quarters of GOP voters (72%) say increased tariffs will be good for the United States, about five times the share of Democratic voters who support higher tariffs (14%). 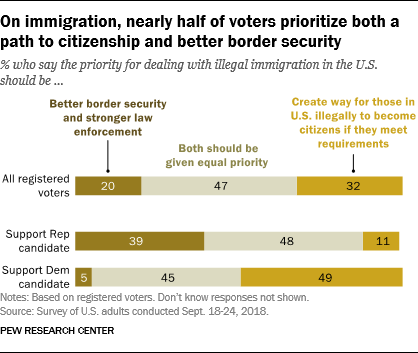 Looking at voters’ priorities for immigration policy, there is some common ground among partisans. When asked whether the policy priority should be “creating a way for immigrants already here illegally to become citizens if they meet certain requirements,” or “better border security and stronger enforcement of our immigration laws” – or whether both should be given equal priority – nearly half of Republican voters (48%) and about as many Democratic voters (45%) say both should be given equal priority.

(For more on how voters view the importance of immigration, health care, taxes, trade and other issues, see “Voter Enthusiasm at Record High in Nationalized Midterm Environment.”)

Since 2016, the share of adults in the general public who say border security should take priority over creating a way for those in the country illegally to become citizens has decreased. Two years ago, about a quarter (24%) said stronger law enforcement should be the priority for dealing with illegal immigration. Today, about two-in-ten (19%) say this.

During that same period, the share who prioritize creating a pathway for illegal immigrants to gain citizenship has increased modestly – from 29% in 2016 to 33%. 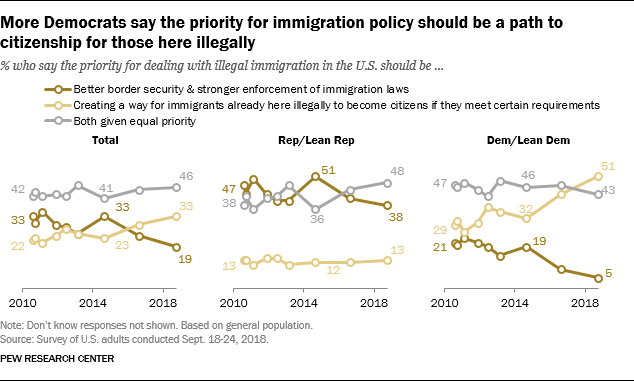 A plurality (46%) continue to say that both of these should be given equal priority.

About half of Democrats and Democratic leaners (51%) now say creating a way for immigrants who are currently here illegally to become citizens should be prioritized – the largest share saying this since the question was first asked in August 2010; 43% say border security and a pathway to citizenship should be given equal priority. Just 5% say border security should take the higher priority.

There are large demographic differences within the general public on priorities in dealing with illegal immigration.

Women are much more likely to prioritize a legal pathway to citizenship than men (40% to 27%).

Though a plurality of whites say both should be equally prioritized, whites (23%) are far more likely than blacks (6%) and Hispanics (9%) to say better border security should take priority.

Americans’ views of relationships with other nations 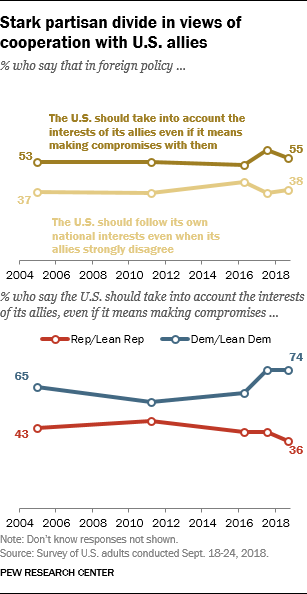 A majority of Americans (55%) continue to say that the U.S. should take into account the interests of its allies in foreign policy, even if it means making compromises with them. Fewer say the U.S. should follow its own national interests, even when its allies strongly disagree (38%).

Since 2017, the public has become slightly less likely to say compromising with allies is preferable (59% then, 55% now). This downtick is also more in line with opinions measured in years prior to 2017.

As was true a year ago, Republican and Democratic views differ. Currently, a 38-percentage-point gap separates partisans on whether the U.S. should take into account the interests of allies – one of the largest partisan gaps measured in the past 15 years.

These changes are largely attributable to a shift in views among Democrats and Democratic leaners. In 1999, about two-thirds of Democrats (68%) said other countries often take unfair advantage of the U.S.; just 28% say that today. By comparison, 80% of Republicans now say that other countries take unfair advantage (up from 73% in September 1999). As a result, today there is a wide divide between Republicans and Democrats in these views, when there had been little partisan difference in the 1990s. 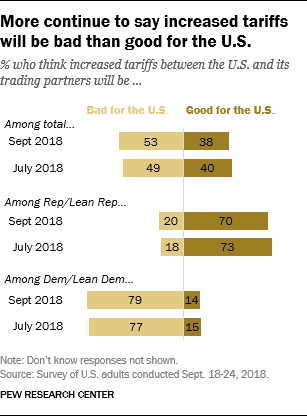 Overall, the public continues to say that increased tariffs between the U.S. and its trading partners – first imposed by the Trump administration earlier this year – will be bad for the country.

In July, roughly half of the public said they thought increased tariffs would be bad for the U.S. Today, a similar share also says this (53%).

Partisans continue to hold opposing views on this policy; 70% of Republicans say they think tariffs will be good for the U.S. Conversely, nearly eight-in-ten Democrats (79%) say they will be bad for the U.S.

Nine months after passage of the Tax Cuts and Jobs Act, views of the sweeping tax law are little changed. More say they disapprove (46%) rather than approve (36%) of the law; about two-in-ten adults (18%) do not offer an opinion either way. 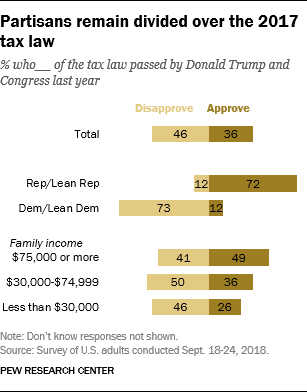 Partisan views of the bill are also similar to those measured just after its passage: 72% of Republicans and Republican-leaning independents say they approve of the tax legislation, compared with just 12% of Democrats and Democratic leaners.

Republicans are somewhat divided along ideological lines. A 79% majority of conservative Republicans say they approve of the bill, while a narrower majority (61%) of moderate or liberal Republicans say the same. Among Democrats, there are no significant differences in these views by ideology.