Women hold a small share of top executive positions in U.S. corporations – roughly 5% to 12%, depending on which group of companies you’re looking at and how broadly you define “top executives.” While women are still underrepresented in these positions, there has been a small increase in the share of women executives over the past decade. 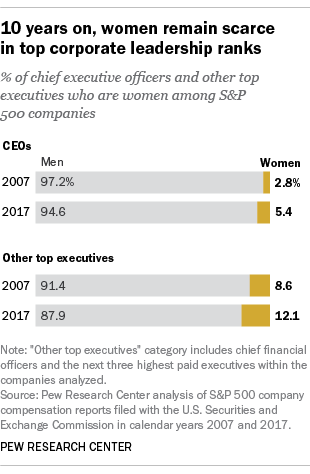 Between 2007 and 2017, the number of companies in the benchmark S&P 500 stock index headed by women chief executives nearly doubled, according to Pew Research Center’s analysis of those companies’ federal securities filings. But female CEOs still are far outnumbered by their male counterparts: In 2017, 27 companies in the S&P 500 (or 5.4%) had women CEOs, up from 14 (2.8%) in 2007.

Gains for women also have been modest at the next-highest level in the corporate hierarchy, which includes such positions as chief operating officer (COO) and chief financial officer (CFO). In 2007, women accounted for only 172 of the 2,002 executives (8.6%) in this “second tier” category; a decade later, women’s share of such jobs had risen to 12.1% (239 out of 1,980).

This analysis builds on one earlier this year that examined the S&P Composite 1500, a broad stock index designed to represent all but the smallest publicly traded companies. The new analysis focuses on the S&P 500, which is designed to represent the largest U.S. public companies (those with total stock market value of $6.1 billion or more).

This analysis is based on data taken from executive-compensation reports that public companies are required to file annually with the federal Securities and Exchange Commission. In general, companies must report detailed pay information for their CEO, CFO and the next three highest paid executives. Collectively referred to as “named executive officers,” this group often is considered by leadership researchers as equivalent to a company’s top management team; they not only include the current CEO but also are an important source of potential CEOs, either for their own company or other ones.

For this post, we examined the compensation reports filed in calendar year 2017 by companies included in the S&P 500 at the end of that year, as well as the reports filed in calendar year 2007 by the companies in the S&P 500 as it existed at the end of that year. (The indexes add and drop companies over time to reflect corporate mergers, spinoffs, new listings, bankruptcies and other events.) We excluded any executives who had left their company by the time the compensation report was filed.

The S&P 500 is divided into 11 broad economic sectors, such as energy and health care. The small number of female CEOs in both of the years we analyzed makes direct comparisons at the sector level tricky, but in 2007 the sector with the most women CEOs was consumer staples – six of the 39 companies in that sector (15.4%) were headed by women. In 2017, consumer staples came in second to utilities, which went from having no female CEOs in 2007 to having six out of 28, or 21.4%. (Four of the 34 consumer staples companies, or 11.8%, were headed by women last year.) 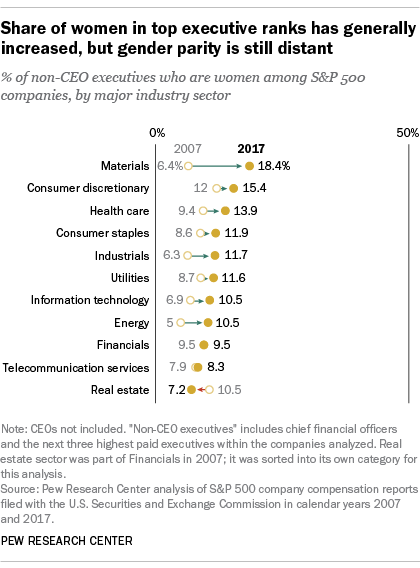 The share of women top executives below the CEO level rose in all but two sectors between 2007 and 2017. The biggest jump was in the materials sector, which covers producers of industrial inputs such as chemicals, metals and packaging. Just 6.4% of non-CEO top executives in materials were women in 2007, but that share nearly tripled by 2017, to 18.4%. That made materials the sector with the highest percentage of women in non-CEO top jobs last year (although none of the roughly two dozen companies in that sector had a woman in the CEO’s chair in either 2007 or 2017).

In both of the years examined, top women executives (other than CEOs) were heavily concentrated in a relative handful of corporate jobs – mainly related to finance, legal affairs and human resources. That has implications for their potential to ascend to the CEO’s office: Previous research suggests that executives in such roles are less likely to become CEOs than more operations-focused executives. 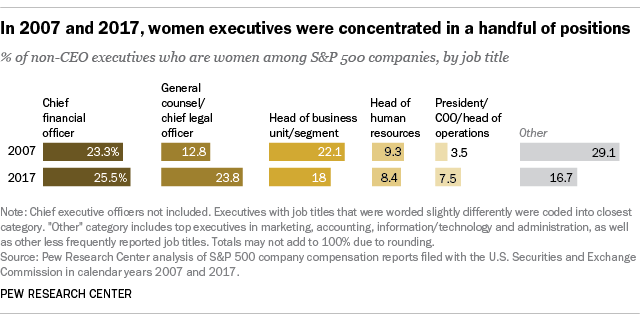 Only six women in 2007 held the title of president, chief operating officer and/or head of operations – typically the second-highest office in a corporation, and often seen as the CEO’s heir apparent. In 2017, women in those roles had tripled in number, to 18, but they still represented just 7.5% of the total.

The number of female second-tier executives who headed major business lines or operating divisions rose a bit, from 38 in 2007 to 43 last year, though their overall share of the total fell from 22.1% to 18.0%. Human-resources chiefs accounted for 8.4% of all women in top non-CEO positions in 2017, down slightly from 9.3% in 2007.

A majority of Americans (59%) would like to see more women in top executive positions in business, according to a recent Pew Research Center survey. But even as more women move into management positions, many Americans are skeptical that the country will ever reach gender parity in this area.

The survey also found that half or more of the public sees little difference between men and women on most aspects of corporate leadership. However, among those who do see a difference, women are viewed as stronger in several areas – from “creating a safe and respectful workplace” to “providing fair pay and good benefits.” Two areas where more people said men do a better job than women were “negotiating profitable deals” (28% to 9%, with 61% saying there was no difference between genders) and “being willing to take risks” (41% to 8%, with 49% saying no difference).