The United States has a religious makeup that’s broadly similar to that of many Western European countries. Most people on both sides of the Atlantic say they are Christian, for example. At the same time, substantial shares in the U.S. and Europe say they are religiously unaffiliated: Roughly a quarter of the American adult population identify as “nones” (23%), similar to the shares in Germany (24%), the United Kingdom (23%) and other Western European countries.

At that point, however, the similarities end: U.S. adults – both Christian and unaffiliated – are considerably more religious than their European counterparts by a variety of other measures, according to an analysis of data from Pew Research Center’s 2014 U.S. Religious Landscape Study in the U.S. and a 2017 survey of Western Europeans. For instance, about two-thirds of U.S. Christians pray daily (68%), compared with a median of just 18% of Christians across 15 surveyed countries in Europe, including 6% in Britain, 9% in Germany, 12% in Denmark and 38% in the Netherlands.

Similarly, 27% of religious “nones” in the U.S. – those who describe themselves as atheist, agnostic or “nothing in particular” – believe in God with absolute certainty. Across the surveyed nations in Western Europe, however, the share of religiously unaffiliated who believe in God with absolute certainty ranges from just 1% in Austria, France, Germany and the UK to 12% in Portugal, with a regional median of 3%. 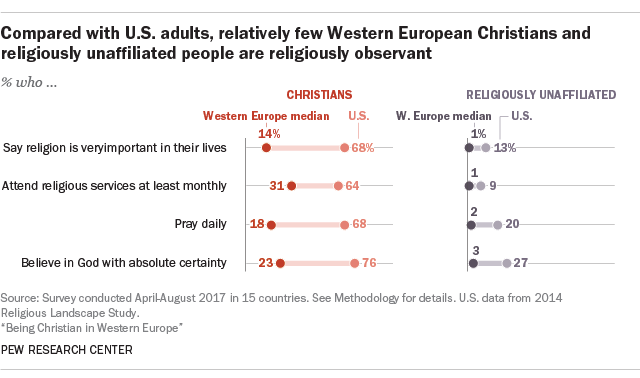 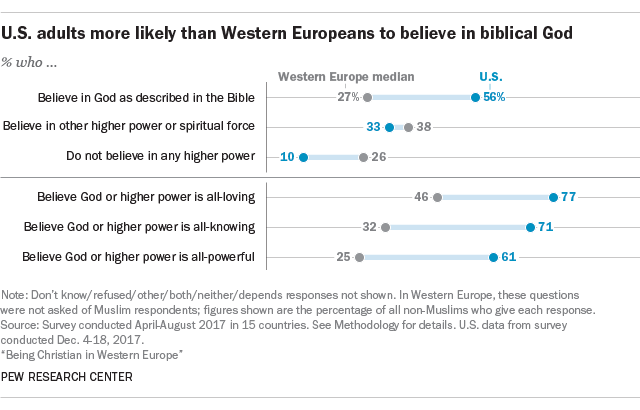 At the other end of the spectrum, Americans are much less likely than Western Europeans to say they do not believe in a higher power of any kind (10% vs. a median of 26%).

U.S. adults are also much more likely than Europeans to believe in three traits that are commonly associated with Christian notions of God: that God “loves all people regardless of their faults,” “knows everything that goes on in the world,” and “has the power to direct or change everything that goes on in the world.” About six-in-ten Americans (61%) say that God is all-powerful, for instance, while the median in Western Europe on this question is 25%. And in Denmark and Sweden, only 13% of adults say this.