As the Trump administration proposes changes to the North American Free Trade Agreement (NAFTA), Americans have sharply different feelings about the two countries that, along with the U.S., are part of that agreement. 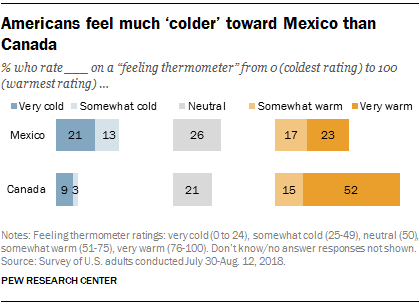 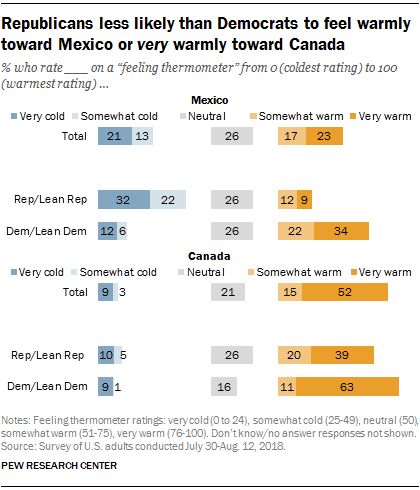 There are sizable partisan differences in opinions of both Mexico and Canada. More than half of Democrats and Democratic-leaning independents (55%) say they feel warmly toward Mexico, including about one-third (34%) who say they feel very warmly.

There has been a small positive shift in Democrats’ feelings and a small negative shift in Republicans’ feelings toward Mexico since 2016. However, the public’s overall feelings about Mexico have not changed in the last two years (Canada was not included in that survey).

In contrast to opinions about Mexico, majorities in both parties give Canada warm ratings, but there is a wide gap in very warm feelings. About six-in-ten Democrats (63%) have very warm feelings toward Canada, compared with 39% of Republicans.

A survey last fall found that a majority of Americans (56%) viewed NAFTA favorably, but Democrats were much more positive about the agreement than were Republicans. About half of Republicans (53%) said Mexico benefitted more from NAFTA than did the U.S.; just 16% of Democrats said the same.

Note: The topline for this post can be found here (PDF), and the methodology is here.