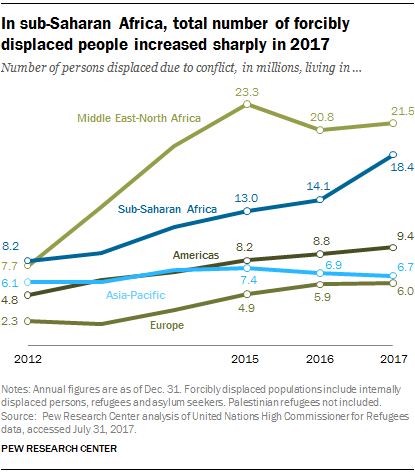 The total number of people living in sub-Saharan Africa who were forced to leave their homes due to conflict reached a new high of 18.4 million in 2017, up sharply from 14.1 million in 2016 – the largest regional increase of forcibly displaced people in the world, according to a Pew Research Center analysis of United Nations High Commissioner for Refugees data.

The world’s displaced population has increased dramatically since 2012, reaching its highest levels since World War II. The Middle East drove much of the increase between 2012 and 2015 due to conflicts in Syria, Iraq and Yemen, but in 2017, the vast majority of growth has come from displaced populations living in sub-Saharan Africa. Since 2015, the region’s displaced population has jumped by 42%, with most of this increase taking place in 2017 alone. By comparison, the number of displaced people living in the Middle East-North Africa region fell 8% between 2015 and 2017, though it remains the world’s largest total overall.

Due to these trends, the geography of the world’s displaced population has started to shift: Some 30% of forcibly displaced people globally lived in sub-Saharan Africa in 2017, up from 23% in 2015. Meanwhile, the Middle East-North Africa share dropped from 41% of the world’s total in 2015 to 35% in 2017. 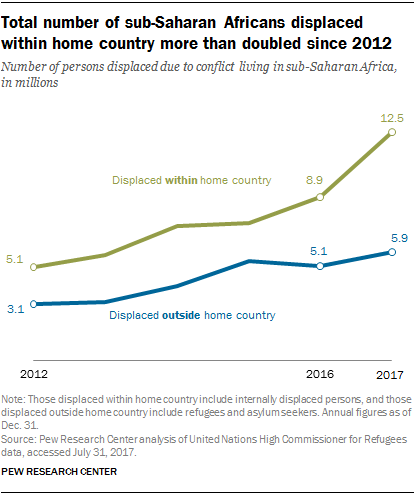 Most of the increase in sub-Saharan Africa has come from a wave of internally displaced persons – those forced from their communities due to conflict and who remain within their home country. In sub-Saharan Africa, this population grew to 12.5 million in 2017, a 40% increase from the previous year, when the population was 8.9 million.

The number of displaced people who have left their home country due to conflict or persecution and received international protection – otherwise known as refugees – has grown more modestly within sub-Saharan Africa. The region’s number of refugees reached 5.4 million in 2017, up 16% over 2016 but short of the record 6.5 million refugees reported in 1994 during the Rwandan genocide.

Uganda hosted the highest number of sub-Saharan refugees (nearly 1.4 million) in 2017, mostly from South Sudan. Nearly 900,000 refugees lived in Ethiopia, with nearly half from South Sudan, and many of the rest from Somalia and Eritrea. The Democratic Republic of the Congo had more than 500,000 refugees from various neighboring countries, including Rwanda, Central African Republic and South Sudan. 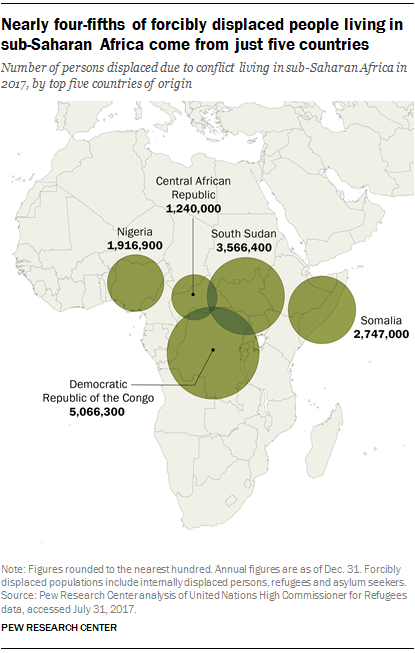 Another way to view displacement is to look at the home countries for all displaced people, whether forcibly displaced within their home country or living in other countries. Nearly four-in-five displaced persons (79%) living in sub-Saharan Africa came from just five nations in 2017: Democratic Republic of the Congo, South Sudan, Somalia, Nigeria and Central African Republic. (Many refugees from these origin countries also belong to long-term refugee populations – communities that have had 25,000 or more refugees for five or more years.)

With more than a billion people living in sub-Saharan Africa, the number of displaced people in the region made up just 1.8% of the region’s population in 2017. Nonetheless, this share has increased in recent years and is at its highest level since records on displaced persons began in 1993. In 2017, only the Middle East-North Africa region had a higher share of its population living as internally displaced persons, refugees or asylum seekers (3.8%).