The European Union’s unemployment rate has dropped to its lowest point in almost a decade, though joblessness still varies widely among the 28 countries that make up the bloc, according to a Pew Research Center analysis of data from Eurostat, Europe’s statistical agency. 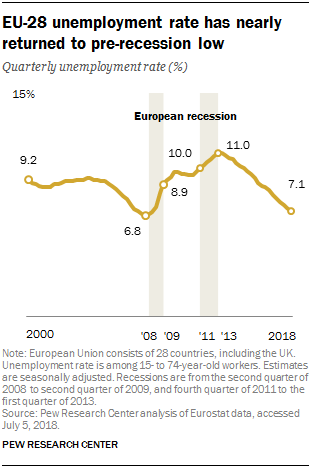 Explore our interactive on unemployment rates in the 28 countries that make up the European Union.

As Europe’s overall unemployment rate has returned to pre-recession levels, public optimism about the economy has increased in some of the bloc’s countries. In fall 2017, for example, 85% of Germans said the economic situation in their country was very or somewhat good. That was up from 2007, when 63% said the same, according to Pew Research Center surveys.

But public opinion about the economy has not improved everywhere. In Spain, where unemployment remains high despite dropping in recent years, just 28% of adults gave the economy a positive grade in fall 2017, down from 65% in 2007. In the United Kingdom, 41% said that their national economy was good, down from 69% in 2007, even though the British unemployment rate is relatively low and has steadily decreased since the financial crisis ended.

The Greek public, meanwhile, continued to give its country’s economy an extremely low rating in a spring 2017 survey, reflecting Greece’s persistently high unemployment rate. Almost all Greeks (98%) said the country’s economic situation was somewhat or very bad in 2017, unchanged from the share in 2012 that said the same (the first time the question was asked).

Unemployment varies widely by country in the EU, in many cases reflecting national differences in economic performance. In the first quarter of 2018, the Czech Republic, Germany, Hungary and Poland had the lowest unemployment rates, while Greece, Spain, Italy, Croatia and Cyprus had the highest.

Nearly all EU countries’ unemployment rates declined from the first quarter of 2013 – the end of Europe’s second recession – to the first quarter of 2018, but the degree of change differed starkly between nations. The countries with the largest percentage-point decreases include Spain (-10.0 percentage points), Portugal (-9.7) and Ireland (-8.7), while unemployment decreased far more modestly in Austria (-0.3 points), Luxembourg (-0.3), Italy (-0.8) and France (-1.1). Only Finland (+0.1) saw an increase during this time.

Youth unemployment in the EU has also dropped to pre-recession levels. At the beginning of 2018, the unemployment rate among workers ages 15 to 24 (15.6%) was the same as at the start of the recession in the second quarter of 2008.