Four decades after the birth of Louise Brown, the first “test-tube baby” conceived via in vitro fertilization (IVF), 33% of American adults report that they or someone they know has used some type of fertility treatment in order to try to have a baby, according to a new Pew Research Center survey. 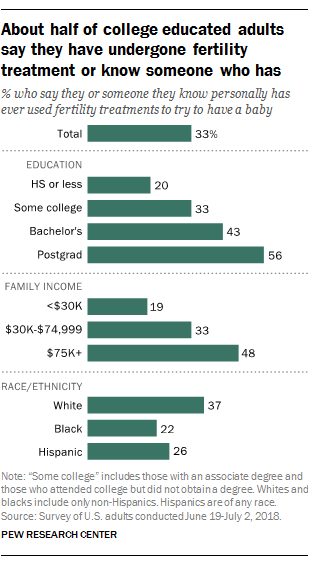 Looking only at women nearing the end of their childbearing years, 9% report that they have ever personally undergone a fertility treatment or had a spouse or partner do so, according to a Pew Research Center analysis of National Center for Health Statistics data. (An additional 5% of these women report that they or their partner sought medical advice or testing regarding fertility, but did not undergo any additional treatments.) 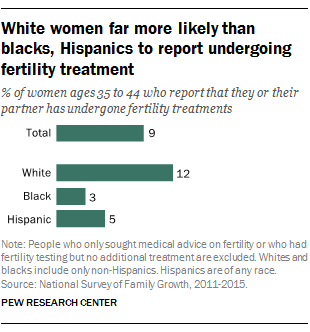 Among women ages 35 to 44, those with at least a bachelor’s degree, those with incomes of $75,000 or more and those who are white are particularly likely to say they have personally undergone fertility treatments or to have had a spouse or partner do so. For example, among white women in this age group, 12% say they’ve undergone this type of treatment, compared with 3% of black and 5% of Hispanic women.

While fertility treatments can encompass a variety of procedures, the Centers for Disease Control and Prevention (CDC) refers to the subset of fertility treatments that involve handling embryos or eggs in a lab – including IVF – as “assisted reproductive technology” (ART). Since 1996, more than 1 million U.S. babies have been born as a result of these techniques, according to Pew Research Center estimates based on CDC data collected from fertility clinics. In 2016, the most recent year for which national totals are available, more than 75,000 babies were conceived using ART. 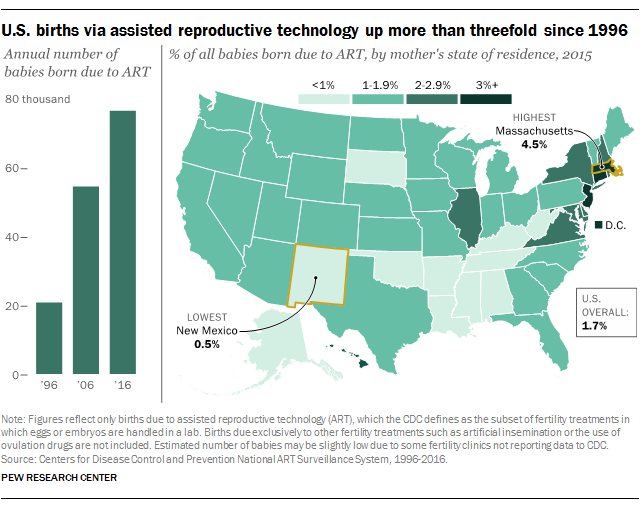 About 2% of all births in the United States now result from ART, with higher rates in several Northeastern states. Massachusetts – one of a handful of states that mandate insurance coverage for some fertility treatments – has the highest share of ART babies (4.5%). Births due to ART tend to be lowest in southern states. Meanwhile, in New Mexico, where there are very few fertility clinics and no mandated coverage, the share of births resulting from ART dips as low as 0.5%.