Donald Trump has successfully appointed more federal appeals court judges so far in his presidency than Barack Obama and George W. Bush combined had appointed at the same point in theirs, according to a Pew Research Center analysis of data from the Federal Judicial Center. And with his nomination of Brett Kavanaugh to the Supreme Court, Trump soon could install his second justice on the nation’s highest court, too.

But while Trump has already left a considerable imprint on the nation’s higher federal courts, he trails Obama, Bush and other recent presidents in the number of lower-court judges he has appointed to date. 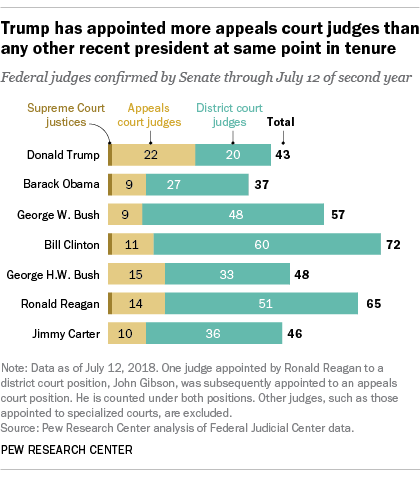 Several factors can determine the number of judges that a president successfully appoints. These include the number of court vacancies that exist and the rate at which the president identifies and nominates candidates to fill them.

Other important factors involve the Senate, which is constitutionally tasked with voting on judges put forward by the president. Trump has the benefit of a Republican Senate majority, just as Obama had the advantage of a Democratic-led Senate during his first two years in office. An additional benefit for Trump is that the Senate now has a lower vote threshold for confirming judges than existed during other recent presidents’ first two years in office.

Trump has received mixed reviews from the public for his handling of judicial appointments. In a Pew Research Center survey earlier this year, 46% of Americans said they were at least somewhat confident in Trump to make good appointments to the federal courts, while a nearly equal share (48%) said they were not too or not at all confident in him to do so. But these views were sharply divided along partisan lines. About eight-in-ten Republicans and Republican-leaning independents (82%) said they had at least some confidence in Trump regarding judicial appointments, a view shared by just 19% of Democrats and Democratic leaners. 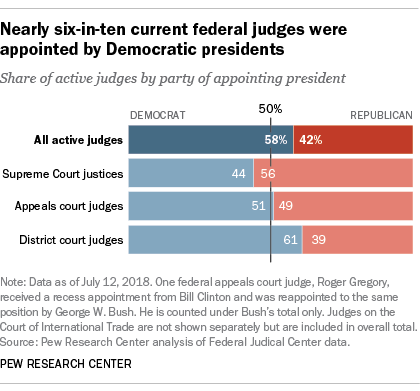 As of July 12, the current federal judiciary overall consists of 725 active judges across 94 district courts, 13 appeals courts, the Supreme Court and one additional court, the Court of International Trade. (This analysis counts only Article III judges who are included in the Federal Judicial Center’s biographical database, which excludes three district-level courts in U.S. territories.) Of these judges, 58% were appointed by Democratic presidents and 42% were appointed by Republicans, according to the Center’s analysis. 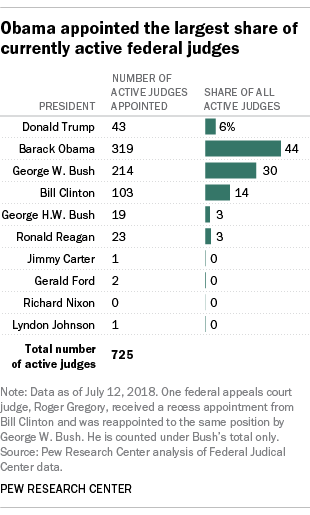