Substantial shares of people around the globe say they closely follow news about the United States, according to a new Pew Research Center report.

Across 37 countries surveyed in the spring of 2017, a median of 48% say they closely follow news about the U.S., compared with 50% who do not. (While interest in U.S. news is high in many countries, overall, people around the world follow national and local news more closely than international news.)

Interest in news about the U.S. is highest in Canada, where 78% say they track it closely. Next highest is the Netherlands (75%), followed by some of America’s closest allies: Japan, Germany and Australia. Across 10 European nations, a median of 51% say they follow news about America closely.

Many Latin Americans, on the other hand, are not particularly interested in what happens in the U.S. Roughly four-in-ten or fewer in Brazil, Colombia, Argentina, Chile and Peru follow U.S. news closely. However, a 55% majority of Mexicans follow American news closely. 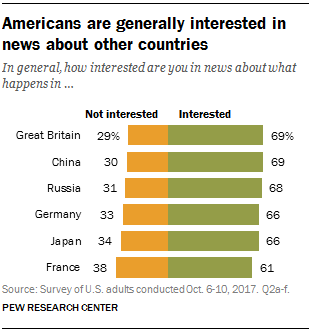 In many countries, interest in news about America is connected to educational attainment. In 24 of the 37 countries surveyed, those with more education are more likely to say they closely follow news about the U.S. than those with less education.

And in 27 countries, those who say they like American pop culture, such as music, movies and TV, are also more likely to follow America-centric news. 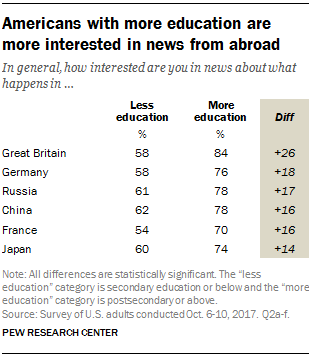 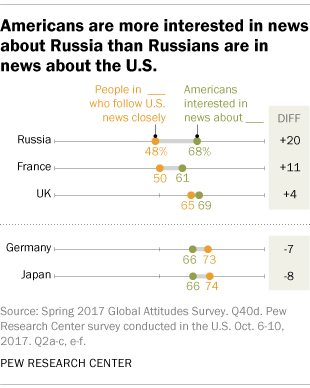 In the opposite direction, Germans and Japanese are more interested in news about the U.S. than Americans are about these key allies.