The recent surge in refugees from Syria and other Muslim-majority nations to Europe has prompted a backlash among segments of Europe’s population, including the rise of political parties that advocate a halt to immigration and groups protesting against the “Islamization” of the continent. But just how many Muslims are there in Europe? How many will there be in the future?

The new report includes three different projections for the coming decades, based on three different sets of circumstances involving migration. None of these are predictions, because predicting future migration patterns is impossible; none will play out exactly. But all are data-based projections intended as a starting point from which to imagine other scenarios. 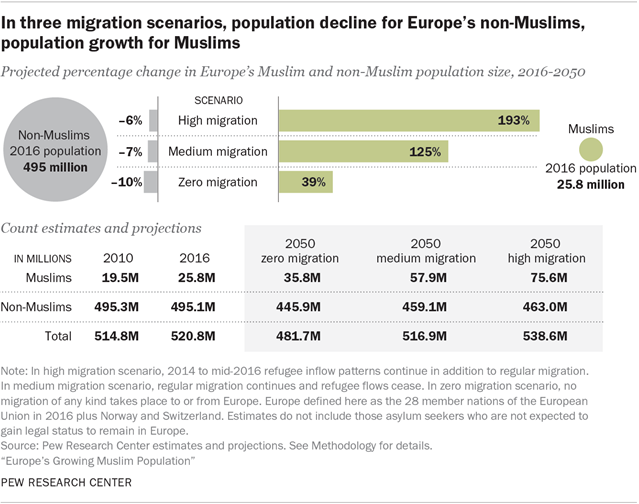 The first scenario envisions a complete halt to Muslim immigration, beginning midway through 2016, the end of the time period analyzed in the report. This did not happen, of course, but we still modeled such a scenario to see what the future might look like with migration removed from the equation.

In this scenario, Europe’s Muslim population is projected to increase by about 10 million people, from an estimated 25.8 million Muslims in 2016 to 35.8 million in 2050. In percentage terms, Muslims would rise from about 5% of Europe’s overall population today to 7.4% at midcentury – not only because Muslims are growing in absolute numbers, but because the non-Muslim population in Europe is expected to decline by roughly 10%.

This stark contrast is driven by the fact that Muslims in Europe are younger than non-Muslims and have more children. Europe’s aging non-Muslim population has a fertility rate of just 1.6 children per woman, well below what demographers call “replacement-level” fertility, while Muslims in Europe average a full child more per woman (2.6).

France would experience notable change even in this zero migration scenario, with the relatively young French Muslim population rising from 5.7 million (8.8% of the population) to 8.6 million (12.7%).

But Europe’s borders have not been closed, nor are they likely to be completely shut anytime soon. Given this reality, a “medium migration” projection seems more plausible.

In this scenario, Europe’s Muslim population doubles from 25.8 million (4.9%) in 2016 to 11.2% in 2050. This assumes that no more refugees would arrive in Europe, but that recent “regular” migration patterns would continue in the coming decades. (Regular migrants are those who are not seeking asylum but rather moving for reasons related to economics, family, education or something else.)

The UK, which has received more regular Muslim migrants in recent years than any other European country, would have the continent’s largest Muslim population by 2050 under this scenario – just over 13 million, or 16.7% of the UK’s population. It is unclear, however, how the UK’s unfolding exit from the EU (Brexit) will affect the country’s future migration policies.

We also modeled a “high migration” scenario in which regular migration to Europe continues and the record refugee flows seen between the beginning of 2014 and mid-2016 also extend indefinitely in the future.

Europe’s future may be unlikely to play out in this way, in large part because EU policies have already slowed the pace of refugee arrivals from Syria and elsewhere via Turkey. But if this high refugee flow were to continue, Europe’s Muslim population would grow to more than 75 million in 2050 – about 14% of the continent’s population. While Muslims would be considerably more numerous in this case, they would still be greatly outnumbered by both Christians and people with no religious affiliation.

Under the high migration scenario, Germany would have by far the biggest Muslim population in Europe in 2050 – 17.5 million, or about one-in-five Germans – because Germany has accepted the greatest number of Muslim refugees in recent years. Sweden has also been a major destination for refugees, and its population (which is much smaller than Germany’s) would be more than 30% Muslim at midcentury. In both cases, however, recent policy changes have been made to limit refugee flows, making these high-end scenarios far less likely. [add link to sidebar]

Economic and political conditions outside Europe, as well as migration policies inside it, will surely continue to change. But based on the current circumstances of regular migration combined with some reduced numbers of refugees continuing to arrive, the most realistic endpoint for Europe may be somewhere between the medium and high migration scenarios – meaning Muslims could make up between 11.2% and 14% of Europe’s population in 2050.