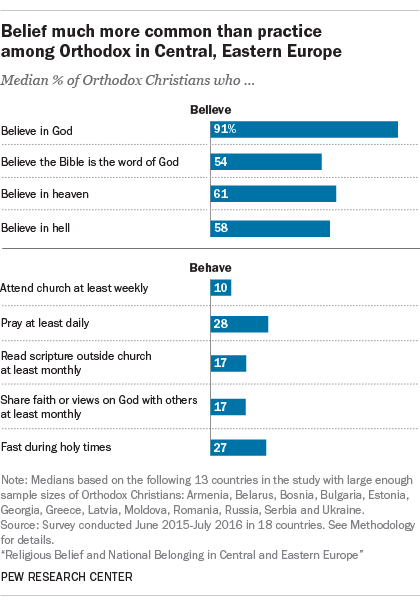 Russia and other countries in Central and Eastern Europe have experienced a resurgence of Orthodox Christian identity since the fall of the Soviet Union, according to a new Pew Research Center survey of 18 countries in the region. This increase in religious identity is accompanied in large part by high levels of religious belief, such as belief in God.

But Orthodox Christians in this region do not display high levels of religious practice, such as regularly attending church. To use terminology popularized by British sociologist Grace Davie, they might be described as religiously “believing and belonging without behaving.”

Orthodox Christians make up an estimated 57% of Central and Eastern Europe’s total population, including large majorities in 10 of the 18 countries surveyed, from Russia to Serbia to Greece. Not only do large shares of Orthodox Christians in these countries say religion is an important part of their identity, they also embrace many of Orthodoxy’s core beliefs. (Indeed, the word “orthodoxy” is derived from the Greek word for “doctrine” or “belief.”)

For example, the vast majority of Orthodox Christians in the region – a median of 91% – say they believe in God. (The median is based on the 13 countries surveyed with a large enough Orthodox population to sample.) Large shares also say they believe in heaven and hell and that the Bible is the word of God.

But their orthodoxy does not necessarily translate into high levels of practice, or “orthopraxy” (derived from the Greek for “action”). For instance, a median of fewer than one-third of Orthodox Christians in the region report praying daily and fasting during holy times such as Lent. And even smaller shares say they attend church at least weekly (median of 10%), read or listen to scripture outside of church at least monthly (17%) and share their faith at least monthly (17%).

By comparison, Catholics in the region, while just as likely to report certain religious beliefs, such as belief in God, are more likely than the Orthodox to engage in religious practices such as attending church weekly, fasting, taking Communion and sharing their faith.