One-in-six newlyweds (17%) were married to someone of a different race or ethnicity in 2015, according to a new Pew Research Center analysis of U.S. Census Bureau data. This represents a more than fivefold increase from 3% in 1967, the year in which the Supreme Court ruled in the Loving v. Virginia decision that interracial marriages were legal.

While intermarriage is generally more common in metropolitan areas than in more rural non-metro areas (18% of newlyweds vs. 11%), there is tremendous variation within metro areas in the shares of newlyweds who have a spouse of a different race or ethnicity.

Interactive: Which U.S. metro areas have the largest and smallest shares of intermarried newlyweds? 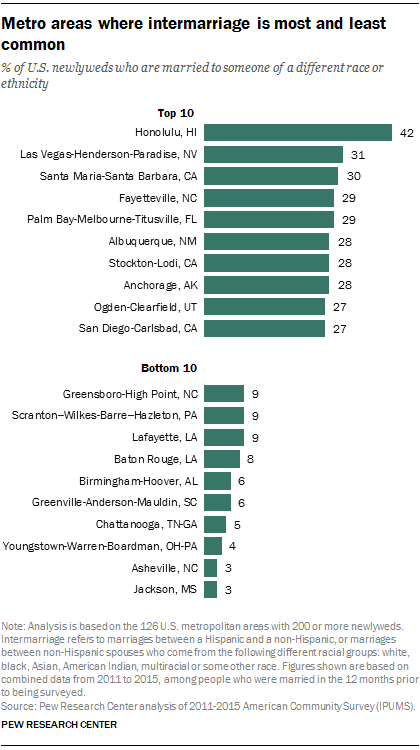 has by far the highest share of intermarried newlyweds of any metro area analyzed – 42% of newlyweds living in and around that city were married to someone of a different race or ethnicity. The same is true of about three-in-ten newlyweds living near Las Vegas or Santa Barbara, California. (All U.S. metro areas with at least 200 newlyweds in the Census Bureau data – 126 in all – are included in this analysis. Click here to see full tables that can be sorted by metro area and race and ethnicity.)

Fayetteville, North Carolina, and the area around Palm Bay-Melbourne-Titusville, Florida, have high intermarriage rates as well. These areas are characterized by less diversity than their Western counterparts. However, the fact that both are located near military bases likely contributes to the high rates of intermarriage, since intermarriage is typically more common among people in the military than among civilians.

At the other end of the spectrum, about 3% of newlyweds in Jackson, Mississippi, and Asheville, North Carolina, are married to someone of a different race or ethnicity. The same is true of 5% of newlyweds around Chattanooga, Tennessee, and 6% of those around Greenville, South Carolina, and Birmingham, Alabama. Intermarriage is relatively uncommon in the Youngstown, Ohio, area as well.

Key facts about race and marriage, 50 years after Loving v. Virginia
Among U.S. cohabiters, 18% have a partner of a different race or ethnicity
8 facts about love and marriage in America
Western States Lead Among Intermarried Newlyweds
Interracial marriage: Who is ‘marrying out’?
Quiz: Are you a Core Conservative? A Solid Liberal? Or somewhere in between?
More Americans now say academic concerns should be a top factor in deciding to reopen K-12 schools
Defining generations: Where Millennials end and Generation Z begins
How the Coronavirus Outbreak Has – and Hasn’t – Changed the Way Americans Work
Views on Race in America