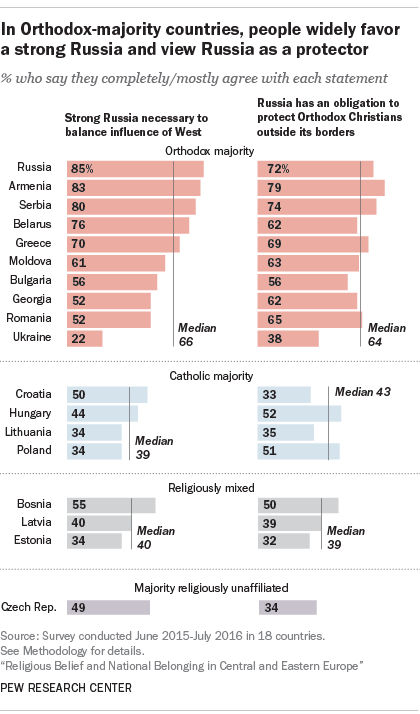 Roughly a quarter century after the end of the Soviet era, Russia retains substantial influence throughout many parts of Central and Eastern Europe. Indeed, Russia is widely viewed by the region’s Orthodox Christians as an important counterweight to Western influences and as a global protector of Orthodox and ethnic Russian populations, according to a new Pew Research Center survey of 18 countries in Central and Eastern Europe. Majorities or pluralities in nearly all Orthodox-majority countries surveyed agree that a strong Russia is necessary to balance the influence of the West, and that Russia has an obligation to protect Orthodox Christians and ethnic Russians outside its borders.

This sentiment prevails even in the three Orthodox-majority countries surveyed that are members of the European Union: Bulgaria, Greece and Romania. 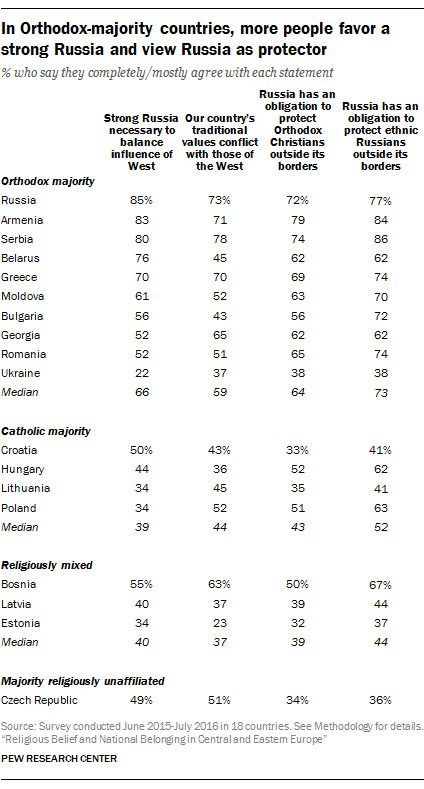 But pro-Russia sentiment tends to run strongest in former Soviet republics that have Orthodox majorities and are not in the EU, including Armenia, Belarus and Moldova.

Support for Russia’s geopolitical and religious role is noticeably weaker in Ukraine, an Orthodox-majority country that is still engaged in conflict with pro-Russian separatists in the eastern part of the country following Russia’s annexation of Crimea in 2014. In addition, people in Catholic-majority or religiously mixed countries in Central and Eastern Europe, such as Poland and Hungary, are much less likely to support a strong role for Russia. 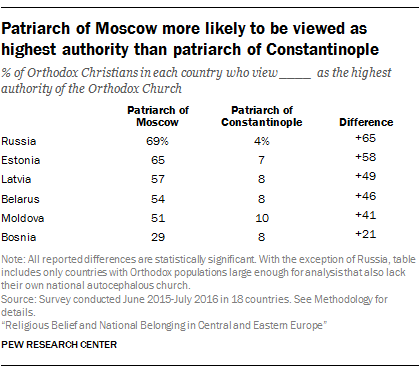 In four of the six countries surveyed that do have their own self-governing churches – Georgia, Serbia, Romania and Bulgaria – most people say they view the leader of their country’s national church as the highest Orthodox authority. Only in Greece does a majority view the patriarch of Constantinople as the highest authority in the Orthodox Church. 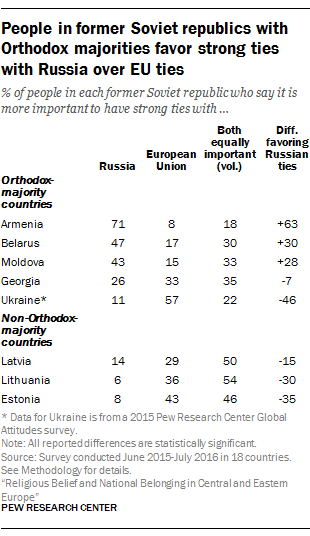 That said, sentiment was split when Pew Research Center asked people in former Soviet republics whether it was more important for their country to have “strong ties” with the European Union or with Russia. Russians were not asked this question, but in three of the five Orthodox-majority countries where it was asked – Armenia, Belarus and Moldova – majorities or pluralities say it’s more important to ally with Russia, while Georgia is roughly divided on which is more important. In the former Soviet republics surveyed that do not have Orthodox majorities, adults are much more likely to say it is more important to have strong ties with the European Union over Russia.