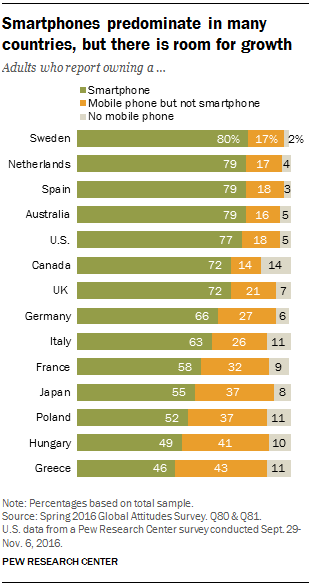 When Pew Research Center surveyed 14 advanced economies in the spring of 2016, one thing was clear: In each of the countries surveyed, nearly all people reported owning a mobile phone. But the shares who own a smartphone vary considerably.

Among the countries surveyed, people in Sweden, the Netherlands, Spain and Australia reported the highest smartphone ownership rates, at roughly eight-in-ten in each country. Nearly as many Americans (77%) said they owned a smartphone, a number that more than doubled since 2011. (A smartphone is defined as a mobile phone that can access the internet or use an app, examples being an iPhone, Android-enabled device or Windows phone. For complete list of examples, see appendix.)

There are sharp digital divides when it comes to reported smartphone ownership within the countries surveyed. In every single country, younger people, those with more education and those with an income above the country median are more likely to own a smartphone compared with older, less educated and poorer members of their societies. 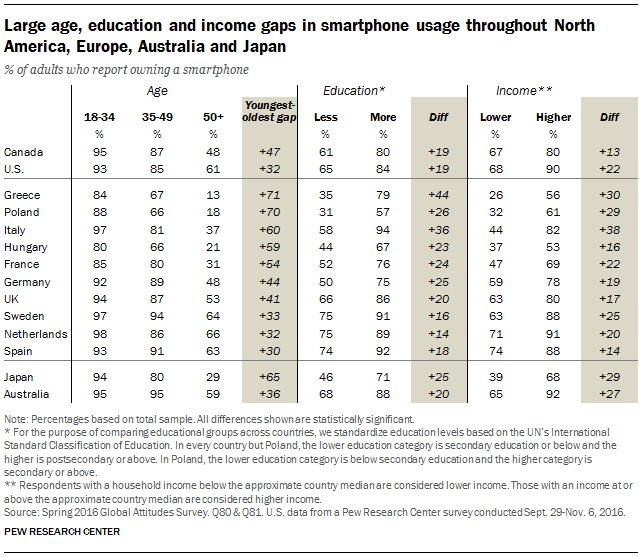 In Italy, those with an income above the national median are 38 percentage points more likely to own a smartphone than those earning less than the median income. Such age, education and income-based digital divides are seen around the world, not just in richer countries.

Among the countries surveyed, only in Japan were men more likely than women (62% vs. 49%) to own a smartphone.

For more on how many adults in several advanced economies use social media, see here.