In recent decades, women have accounted for a growing share of America’s police officers, but this growth has been relatively slow and women remain underrepresented in the field. They also sometimes differ sharply from male officers in their views of policing and their experiences, according to a new Pew Research Center survey conducted by the National Police Research Platform.

Women accounted for 12% of full-time local police officers in 2013 (the latest data available) – up from 8% in 1987, according to the Bureau of Justice Statistics. Women made up even smaller shares in department leadership: About one-in-ten supervisors or managers and just 3% of local police chiefs were women in 2013. 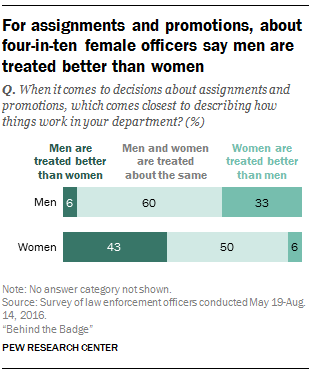 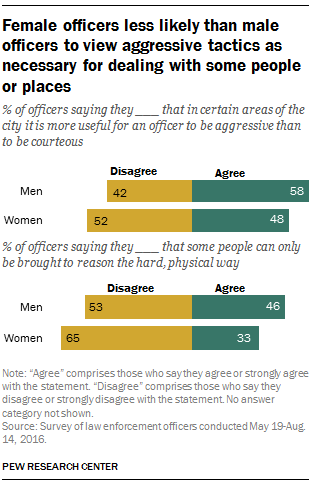 At the same time, men and women share positive views of the citizens they serve. For example, about seven-in-ten male and female officers reject the notion that officers have reason to be distrustful of most citizens (72% and 70%, respectively). And similar shares say at least some of the people in the community where they work share their values and beliefs (70% of male officers and 73% of female officers).

Trust in America: Do Americans trust the police?

A month before George Floyd’s death, black and white Americans differed sharply in confidence in the police