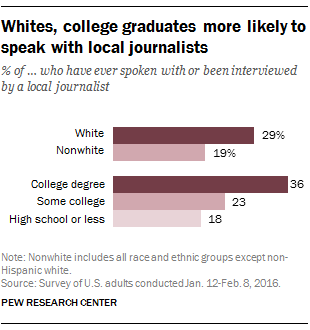 Being interviewed by a local journalist provides an opportunity to have a voice in the civic life and local news ecosystem of one’s community. But it remains a relatively rare experience, as only about a quarter of U.S. adults (26%) say they have ever done so. And among those who have, not everyone’s voice is equally likely to be heard.

Whites, as well as college graduates and those with higher incomes, are more likely than nonwhites to have spoken with or been interviewed by a local journalist, according to a survey by Pew Research Center.

About three-in-ten whites (29%) say they have ever spoken with or been interviewed by a local journalist or reporter, compared with 19% of nonwhites. (Nonwhite includes all racial and ethnic groups except non-Hispanic white.) This difference is particularly striking given that nonwhites generally are more engaged consumers of local news than whites. For instance, while 43% of nonwhites follow local news very closely, only a third of whites say the same – a similar pattern to what we found in our 2015 study of local news habits in three cities. 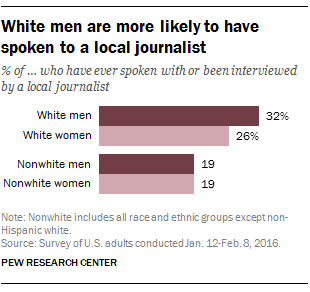 Among adults of all races, women are about as likely as men to have spoken with or been interviewed by a local reporter (28% of men versus 24% of women). However, a gender gap emerges among white U.S. adults. Roughly a third of white men have spoken with a local reporter (32%), compared with only about a quarter of white women (26%). Among nonwhites, women are just as likely as men to be interviewed by a local journalist, with 19% of both genders saying they have had the experience.

There are very few differences across age groups in whether or not someone has spoken with a local journalist, however. Those ages 18 to 29 are less likely than any other age group to have had a conversation with a local reporter, but those 30 to 49, 50 to 64, and 65 and older are all about as likely to have done so.