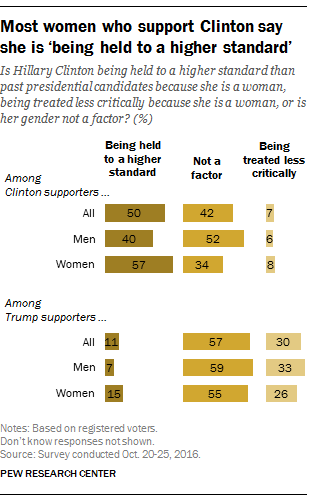 Hillary Clinton is hoping to make history on Tuesday by being elected the nation’s first woman president. While the impact of Clinton’s gender on her candidacy is viewed very differently by her supporters and voters who back Donald Trump, there also is a gender gap among Clinton’s supporters.

Half of Clinton supporters think she is being held to a higher standard than past presidential candidates because she is a woman; just 11% of Trump supporters say the same, according to a Pew Research Center survey conducted Oct. 20-25.

Among men who back Clinton, opinion is nearly the reverse: 52% say Clinton’s gender is not a factor, while 40% say she is held to a higher standard than prior presidential candidates. Very few of Clinton’s male (6%) or female (8%) supporters think she is treated less critically because of her gender.

Nearly all Clinton voters – men and women alike – see her as well-qualified (98% of men, 97% of women). And there are no meaningful differences in their views of Clinton’s patriotism, leadership, honesty and other characteristics.

But there are differences in how men and women Clinton supporters view some of her other personal traits. Only about a quarter of Clinton’s women supporters (26%) say she is hard to like, while 41% of her male supporters say this phrase describes her. This includes nearly half (48%) of men younger than 50, while just a third of women in this age group agree that Clinton is hard to like. 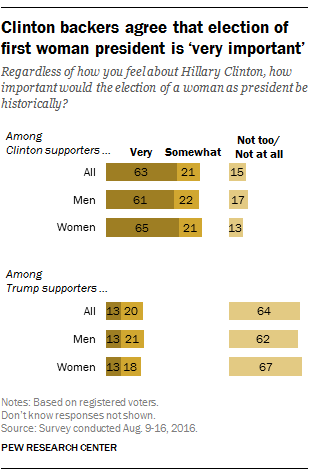 Still, when it comes to the prospect of Clinton making history on Nov. 8, men and women Clinton supporters are on the same page. In an August survey, comparable shares of women (65%) and men (61%) Clinton supporters said the election of a woman president would be very important historically.

By contrast, most Trump supporters – women (67%) and men (62%) alike – said this would be not too important or not at all important.

Men and women in the U.S. continue to differ in voter turnout rate, party identification

In year of record midterm turnout, women continued to vote at higher rates than men

A gender gap in views of Hillary Clinton, even among her supporters