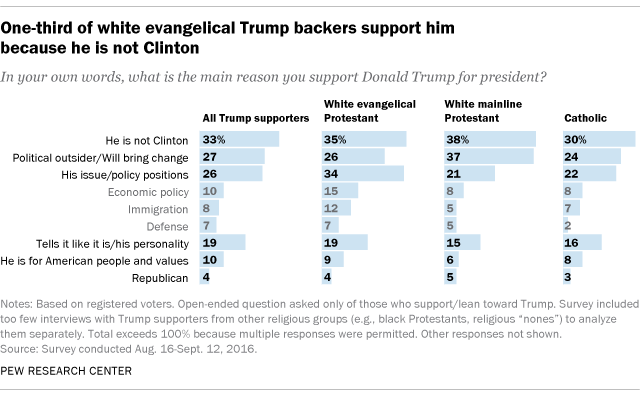 Throughout the primaries and general election campaign, many observers have expressed puzzlement at the support for Donald Trump among white evangelical Protestant voters. Why would evangelicals rally behind a thrice-married candidate who is not widely viewed as particularly religious and whose views on the issues have not always aligned with the preferences of most evangelical voters?

A new Pew Research Center survey gave Trump supporters the chance to describe, in their own words, the reasons they support him over his Democratic rival, Hillary Clinton. Like other Trump backers, many evangelical voters are motivated as much by opposition to Clinton as by support for Trump. Indeed, 35% of white evangelical voters who support Trump mentioned that they do so at least in part because he is not Clinton. (The survey also asked Clinton supporters why they favor her candidacy, and about one-third cited Trump as a main reason they back her.)

Evangelicals cite other reasons for supporting him beyond opposition to Clinton. Roughly one-third of evangelical Trump supporters also pointed to his issue positions as the main reason they support him, and about one-quarter (26%) mentioned his status as a political outsider who will bring change to the political system as a reason for backing him. One-in-five said they support him because of his personality and “tell-it-like-it-is” style. 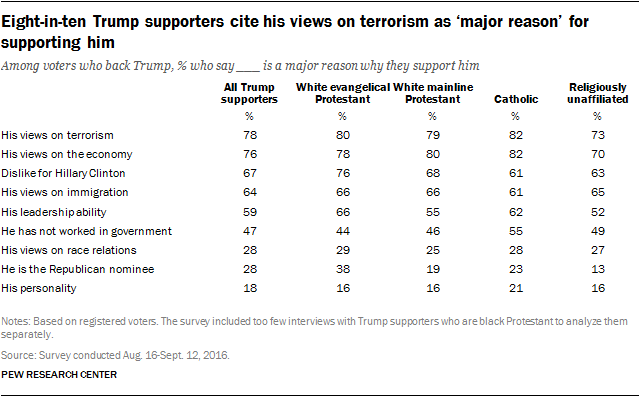 Two-thirds of evangelical voters who support Trump said his views on immigration and his leadership ability are key reasons they favored him, while 44% said they like the fact that he has not previously served in government and 38% are backing him because he is the Republican nominee. Fewer said they back him because of his views on race relations (29%) or because of his personality (16%).

This post and its graphics have been updated and corrected due to an earlier error in the way white evangelical and white mainline Protestant respondents were categorized in the survey.