Immigration policy has been a focal point of Donald Trump’s campaign since he announced he was running for president 14 months ago. Today, amid signs he may be preparing to modify some of his hard-line positions on illegal immigration, here is a review of where Trump supporters stand on the issue: 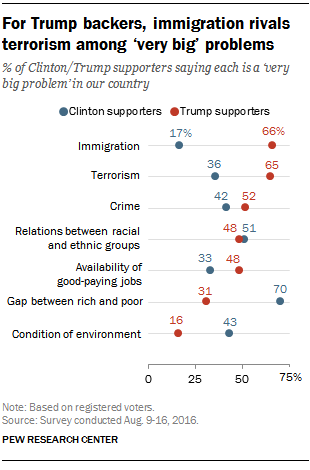 Most Trump supporters view immigration as a “very big problem” in the U.S. In a survey released last week, 66% of registered voters who support Trump in the general election call immigration a “very big problem” in the country. Just 17% of Hillary Clinton backers say the same. Terrorism is the only other issue, among seven included, that is viewed by about as many Trump supporters as a major problem (65%).

2Trump’s proposed border wall gets overwhelming support from his backers. Perhaps no Trump proposal has resonated more strongly with his supporters than his plan to build a wall along the U.S. border with Mexico. Fully 79% of Trump supporters favor building a wall along the entire U.S.-Mexico border; just 18% are opposed. Among Clinton supporters, 88% oppose a border wall, compared with 10% who favor it.

Pro-Clinton voters are far less likely than Trump supporters to express negative views of unauthorized immigrants, and there are only slight differences based on strength of support. 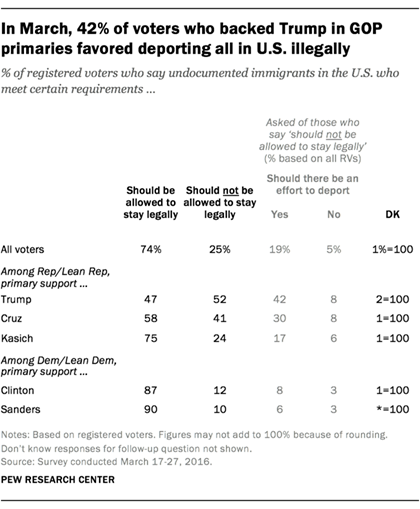 During the Republican primaries, most Trump supporters did not favor a national effort to deport all those in the U.S. illegally. In March, Republican and Republican-leaning registered voters who backed Trump for the GOP nomination were split over whether undocumented immigrants should be allowed to stay in the country legally: 52% were opposed to unauthorized immigrants staying in the U.S. legally, while 47% said they should be allowed to stay if they met certain requirements.

Most Trump supporters who opposed a path to legal status for those in the U.S. illegally supported a national law enforcement effort to deport all unauthorized immigrants. But that constituted fewer than half (42%) of GOP voters who supported Trump for the nomination.

5Today, voters who back a Trump presidency are divided on priorities for U.S. immigration policy. Nearly half (48%) of Trump supporters say the priority for policy to deal with illegal immigration should be stronger law enforcement and better border security. Just 10% say the priority should be creating a way for undocumented immigrants to become citizens if they meet certain requirements. But about four-in-ten (41%) say both of these approaches should be given equal priority.

When Trump voters who give equal priority to both are asked to choose just one, a majority overall comes down on the side of stronger law enforcement and better border security: 78% say this should be the priority, compared with just 19% who prioritize a path to citizenship for those in the U.S. illegally. Among Clinton supporters, opinions are nearly reversed: 80% say a path to citizenship should be the priority, while 19% prioritize tougher law enforcement and better border security.