Religious leaders and institutions have taken part in efforts to address important social issues throughout American history, from slavery to civil rights to today’s advocacy in areas such as reducing poverty. 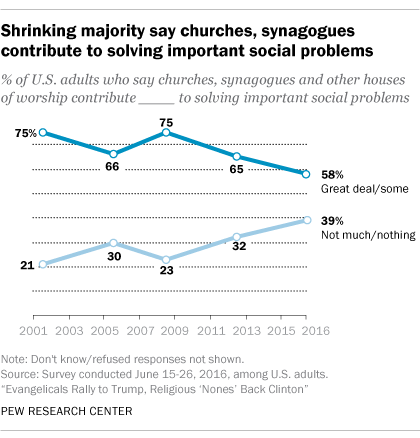 But Americans appear to be growing more skeptical of how much of a difference churches and other houses of worship make in tackling social concerns. A majority of U.S. adults still say religious institutions contribute either “a great deal” (19%) or “some” (38%) to solving important social problems. But the combined figure of 58% has fallen significantly in recent years, according to a new Pew Research Center survey. About four-in-ten Americans (39%) now say religious institutions make little to no contribution in this area.

When the same question was asked in July 2012, roughly two-thirds of respondents (65%) said churches and other houses of worship played at least some role in solving society’s dilemmas. Four years before that, in August 2008, fully three-quarters of Americans (75%) said religious institutions contributed “a great deal” or “some” in this way. 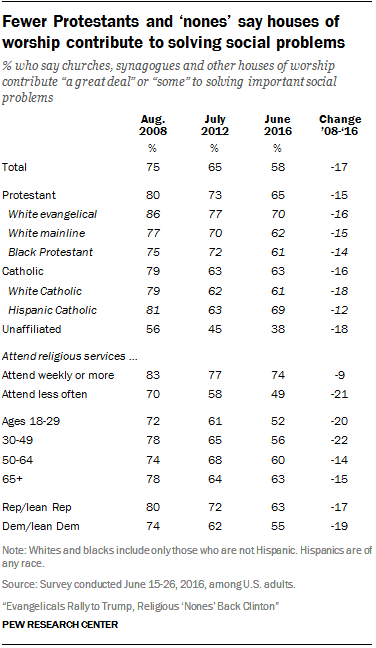 Not surprisingly, people with no religious affiliation (atheists, agnostics and those who say their religion is “nothing in particular”) are less likely than others to see churches as key problem-solvers in society. A minority of religious “nones” (38%) say religious institutions contribute at least some help to solving social problems, compared with, for example, 65% of Protestants and 63% of Catholics who say the same.

One explanation for the changing views of Americans overall on this topic is the recent growth of religious “nones” as a share of the U.S. population. But it is not the only explanation. Even among U.S. adults who do affiliate with a particular religion, the view that churches help solve social problems has become less widespread.

Among white evangelical Protestants, for instance, seven-in-ten now say religious institutions contribute “a great deal” or “some” to solving important social problems, down 16 percentage points from 2008. And among white Catholics, 61% take this view, down 18 points over this eight-year span.

Older and younger Americans, Republicans and Democrats and those who attend religious services regularly and less often all have become less likely to see churches and other houses of worship as key problem-solvers in society.

8 facts about religion and government in the United States
10 new findings about faith among Black Americans
Three-quarters of Black Americans say Black churches have helped promote racial equality
Most Americans oppose churches choosing sides in elections
Few Americans say their house of worship is open, but a quarter say their faith has grown amid pandemic
Quiz: Are you a Core Conservative? A Solid Liberal? Or somewhere in between?
What the data says about gun deaths in the U.S.
What We Know About Gen Z So Far
What the data says (and doesn’t say) about crime in the United States
Biden Nears 100-Day Mark With Strong Approval, Positive Rating for Vaccine Rollout