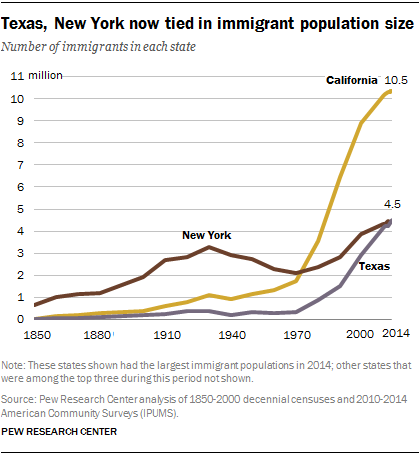 New York had the largest immigrant population of any state from 1850 to 1970, according to a Pew Research Center analysis of U.S. Census Bureau data.

Today’s top three immigrant states account for nearly half of the immigrant population in the U.S. A quarter of U.S. immigrants live in California while 11% live in Texas and another 11% live in New York. 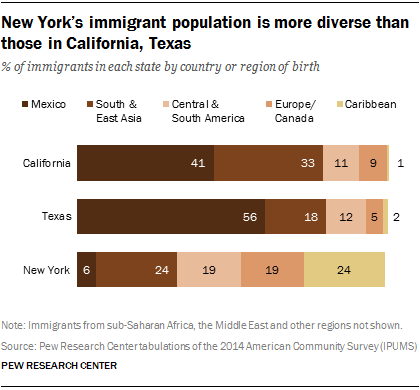 The top country of origin among immigrants in Texas and California has long been Mexico. Mexico was the largest source of migration for Texas’ immigrant population since 1870 and the largest for California since 1930.

For New York, though, the top country of origin has changed over time as different waves of immigrants arrived in the U.S. From 1850 to 1880, immigrants from Ireland outnumbered those of any other country in New York. But Italy took the lead by 1930, and this changed again between 1990 and 2014, when more immigrants from the Dominican Republic lived in New York than any other group.

The characteristics of the immigrant population in these states also differ substantially. For example, about a quarter of New York’s immigrant population ages 5 and older say that they speak only English at home, compared with about one-in-ten in California and Texas. And immigrants in Texas are considerably less likely to have U.S. citizenship than those in New York and California (35% versus 55% and 49%, respectively). Immigrants in New York and California are more likely to have lived in the U.S. for more years than immigrants in Texas, which may in part contribute to these differences.