The very first Twitter message was sent on March 21, 2006. The microblogging platform was then known as twttr – the vowels came later, after the founders bought the twitter.com domain name. It spent its first few months as an internal messaging system for Odeo, the company that developed it, then was opened to the general public in July 2006.

Today, millions of people around the world use Twitter to break and comment on news, disseminate official pronouncements, organize campaigns and protests, or just let their friends know what’s on their minds. Here are five facts about Twitter at age 10: 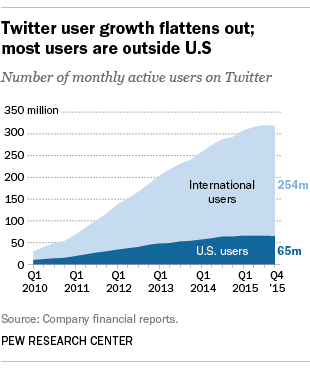 1Twitter’s user base has grown rapidly but may be plateauing. Twitter averaged 320 million monthly active users (MAUs) in the fourth quarter of 2015, 9.6% more than in the same quarter a year earlier, according to the company’s financial disclosure statements. That’s Twitter’s slowest annualized growth rate since at least 2011, when comparable data began to be publicly disclosed. Domestic, international and total MAUs were all flat or slightly down compared with the third quarter. (The company defines an MAU as anyone who accessed the service at least once in the past 30 days.)

2Twitter is largely a global service. Twitter has nearly four times as many users internationally as in the United States – 254 million versus 65 million, as of the fourth quarter of 2015, according to company filings. However, the company says, Twitter’s penetration generally is higher in the U.S. than in other countries in which it operates. Last year, Pew Research Center estimated that 23% of all adult internet users, and a fifth of the entire adult population, uses Twitter. In the U.S., usage is highest among urban residents, adults under 50 and people in upper-income brackets.

3There are six basic types of Twitter conversations. A 2014 report by Pew Research Center that analyzed thousands of conversations on Twitter found that they tended to fall into one of six “archetypes”: Polarized Crowds, where opposed groups talk about the same topic but mostly just to other group members; Tight Crowds, made up of people bound together by some common interest (such as hobbies or professional pursuits); Brand Clusters, large groups that form around particular products, events or celebrities; Community Clusters, multiple small to medium-sized groups that typically form around big news events; Broadcast Networks, where many people follow and retweet a particular news source or commentator but don’t interact much with each other; and Support Networks, usually created when companies, agencies and other organizations respond to customer inquiries and complaints. 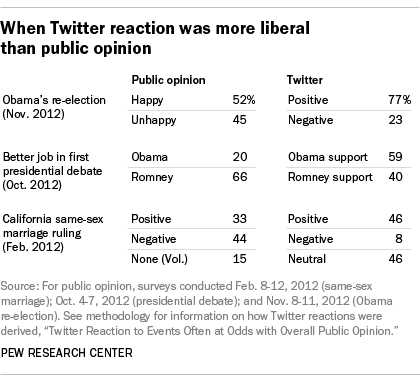 4The Twitterverse doesn’t always mirror the real world. Nearly two-thirds (63%) of U.S. Twitter users get news via the service, but the reaction on Twitter to major political events and policy decisions often differs considerably from general public opinion. That was the conclusion of a 2013 Pew Research Center study that compared the results of national polls to the tone of tweets in response to eight major news events. The Twitter conversation sometimes was more liberal than survey responses, and other times more conservative, but often what stood out was the overall negativity on Twitter. (Those differences might be related to the demographics traits of Twitter users: Center surveys have consistently found that Twitter users are disproportionately young, urban, African-American, and better educated.) 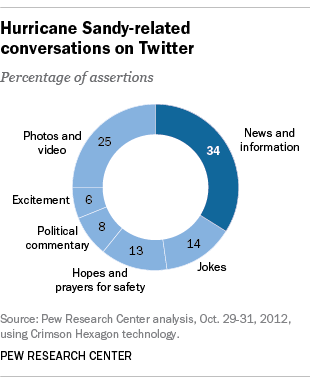 5Twitter can be a valuable tool in helping to deal with emergencies. A 2012 Pew Research Center study found that Twitter was a critical lifeline when Hurricane Sandy devastated wide swaths of the East Coast in October of that year. Twitter traffic during Sandy and its aftermath was more than double what it was just before the storm hit; people mainly used Twitter to share news and information as well as photos and videos.

Similarly, a new study of Twitter activity in 50 metro areas during Sandy found that the per-capita number of Twitter messages in a given area was directly and strongly correlated with the economic damage caused by the storm. That, the researchers said, “makes social media a viable platform for preliminary rapid damage assessment in the chaotic time immediately after a disaster.” They suggested that during a natural disaster, emergency workers and disaster-relief officials should monitor “normalized activity levels, rates of original content creation, and rates of content rebroadcast to identify the hardest hit areas in real time,” and immediately afterward “focus on persistence in activity levels to assess which areas are likely to need the most assistance.”

BONUS FACT: Despite Twitter’s revenue growth (derived mainly from advertising) and global reach, the company has never turned a profit. Last year, Twitter lost $521 million on revenues of $2.2 billion; it has accumulated losses of nearly $2.1 billion.