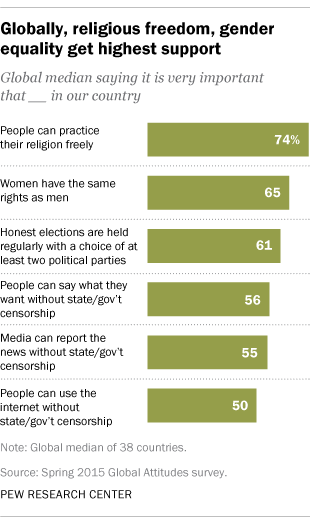 Today, on International Women’s Day, people around the world are celebrating the social, economic, cultural and political achievements of women. Gender equality and women’s empowerment is one of the Sustainable Development Goals set by the United Nations. And gender equality is among the most widely accepted democratic principles around the world, according to a 2015 Pew Research Center survey.

Majorities in 37 of the 38 countries surveyed say that gender equality is at least somewhat important (Burkina Faso is the exception). And a global median of 65% believe it is very important that women have the same rights as men, ranking second only to support for religious freedom among the six democratic values tested. Gender equality ranks above support for the democratic principles of competitive elections, free speech, a free press and internet freedom.

Among the countries surveyed, the highest levels of support for gender equality are found in Canada, Australia, Germany, the United Kingdom and the United States. Roughly nine-in-ten or more in these countries say gender equality is very important. Regionally, the strongest support for women having the same rights as men is found in Europe (a median of 86%), followed by Latin America (80%), Asia-Pacific (60%), Africa (50%) and the Middle East (48%). While only about half across the Middle East view gender equality as an essential democratic principle, there is significant variation among countries – 75% of Lebanese and 69% of Israelis say it is very important, but fewer than 50% in Turkey, Jordan and the Palestinian territories say the same.