For working parents in the U.S., the challenge of juggling careers and family life continues to be a front-burner issue – one that is being recognized by a growing number of employers who have adopted family-friendly policies such as paid leave. But while few Americans want to see a return to traditional roles of women at home and men in the workplace, one reality persists: Women most often are the ones who adjust their schedules and make compromises when the needs of children and other family members collide with work, Pew Research Center data show.

In a 2013 survey, we found that mothers were much more likely than fathers to report experiencing significant career interruptions in order to attend to their families’ needs. Part of this is due to the fact that gender roles are lagging behind labor force trends. While women represent nearly half of the U.S. workforce, they still devote more time than men on average to housework and child care and fewer hours to paid work, although the gap has narrowed significantly over time. Among working parents of children younger than 18, mothers in 2013 spent an average of 14.2 hours per week on housework, compared with fathers’ 8.6 hours. And mothers spent 10.7 hours per week actively engaged in child care, compared with fathers’ 7.2 hours. 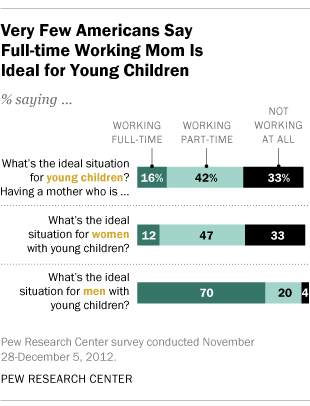 When asked what’s best for women themselves, the public expressed a similar sentiment. Only 12% of adults said the ideal situation for women with young children is to work full time. About half (47%) said working part time is ideal for these women, while 33% said not working at all would be the best situation.

The public applies a much different standard to fathers. When we asked about the ideal situation for men with young children, fully seven-in-ten adults said working full time would be ideal for these fathers. One-in-five adults said part-time work would be ideal and only 4% said it would be best for these dads not to work at all.

In reality, the “ideal” situation is not always the most practical, nor is it always attainable. In fact, according to U.S. government data, 64% of mothers with children younger than 6 are in the labor force, and among working mothers, 72% work full time. 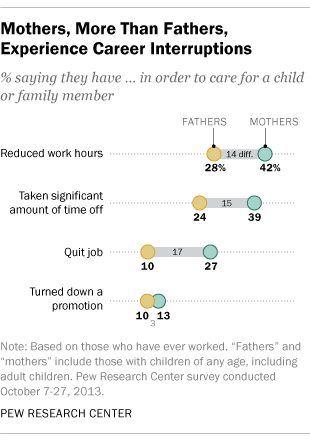 One result is that while 42% of mothers with some work experience reported in 2013 that they had reduced their work hours in order to care for a child or other family member at some point in their career, only 28% of fathers said the same. Similarly, 39% of mothers said they had taken a significant amount of time off from work in order to care for a family member (compared with 24% of men). And mothers were about three times as likely as men to report that at some point they quit a job so that they could care for a family member (27% of women vs. 10% of men).

It’s important to note that when we asked people whether they regretted taking these steps, the resounding answer was “No.” However, it’s also important to note that women who had experienced these interruptions were much more likely than men to say that this had a negative impact on their career. For example, women who took time off at some point in their work life to care for a child or other family member were twice as likely as men who did the same to say that this hurt their career overall (35% vs. 17%). Similarly, among those who took a significant amount of time off from work to look after a family member, 32% of women compared with 18% of men said doing this hurt them professionally.

According to many economists, family-related career interruptions can undermine women’s economic prospects in a variety of ways, by contributing to the gender wage gap and by narrowing the pipeline that feeds top-level jobs. Of course, for lots of women these interruptions may serve as the catalyst to a more balanced life which may in turn outweigh any lost financial benefits.

In her new book “Unfinished Business: Women, Men, Work, Family,” Anne-Marie Slaughter raises many of these issues, and in a recent New York Times article, Slaughter said that what is needed in order to change individual workplaces is a “culture change: fundamental shifts in the way we think, talk and confer prestige.” Our data suggest that a generational shift, if not a culture change, may be coming. When we asked young adults (ages 18 to 32) who don’t yet have children whether they anticipate that becoming a parent will make it harder or easier for them to advance in their job or career, young men were just as likely as young women to say that children will likely slow down their career advancement (roughly 60% in each group). This suggests that Millennial men may be entering their careers with a different set of expectations about what balancing family life and work will entail.

At the same time, though, among young adults with children, women are much more likely than men to say being a working parent makes it harder for them to get ahead at work (58% of Millennial moms say this, versus 19% of Millennial dads).

These issues raise anew debates over government and workplace policies designed to support parents and families. While the national conversation continues, working parents across America will continue to juggle their many responsibilities – making time for caregiving along the way.