On his first papal trip to the U.S., Pope Francis will visit three Northeastern cities that are within a few hundred miles of each other. But while New York City, Philadelphia and Washington, D.C., may be geographically close, their Catholic populations look different from one another in several ways, according to data from the 2014 Religious Landscape Study.

For instance, 85% of Catholics in the Philadelphia metropolitan area are non-Hispanic whites. Whites, however, make up smaller shares of the Catholic populations in New York (57%) and Washington (50%).

From a racial and ethnic perspective, Catholics in the NYC metro area look very similar to U.S. Catholics overall, including about a third who are Hispanic. Fewer D.C.-area Catholics are Hispanic (23%), while more in the capital are black (15%) or Asian (10%) compared with the country overall. 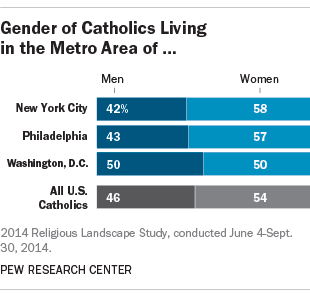 One demographic measure where the three metro areas are similar is the marital status of their Catholic populations. Nearly or roughly half of Catholic adults in New York (50%), Philadelphia (45%) and Washington, D.C., (45%) are married, similar to U.S. Catholics overall (52%). About one-in-ten Catholics in each area (and in the country as a whole) report that they are currently living with a romantic partner outside of marriage.