As life expectancy continues to increase for Americans, more and more are living long enough to become grandparents. For Grandparents Day, here are some key facts about them:

3For most American grandparents, child care is only an occasional responsibility. Our survey on family support in graying societies found that among U.S. grandparents who have helped with child care in the past 12 months, nearly three-in-four (72%) said they did so only occasionally. About one-in-five (22%) said they provided child care regularly. 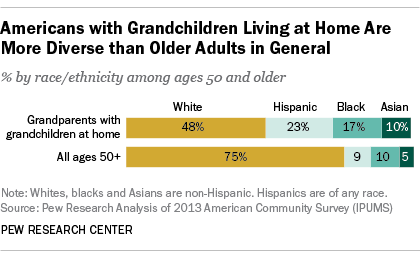 5Older Americans say having more time to spend with family is by far the best part about growing old. Among those ages 65 and older, the two most common answers to an open-ended question on the benefits of aging were spending more time with family (28%) and spending time with grandchildren (25%). The next-most popular answer was financial security, cited by just 14% of respondents.