The graying of the population is one of the most significant demographic shifts occurring in the U.S. today. Some 13% of Americans are now ages 65 and older, and that share is projected to rise to 21% by the middle of this century. Population aging has been even more rapid in other developed countries, such as Germany and Italy. Already one-in-five people in each country is 65 or older. These two countries provide a glimpse of what the U.S. population may look like by mid-century.

Italy and Germany not only have higher shares of older residents than any other countries in Europe or North America, but they also have the highest old-age dependency ratios, meaning they have a greater number of older adults for every 100 working-age adults (ages 15-64). In the U.S., the old-age dependency ratio stands at 19.5, meaning that there are about 20 people ages 65 and older for every 100 people ages 15-64. In both Germany and Italy, this ratio has already reached 30.2

While broad comparisons among the U.S., Germany and Italy are instructive, circumstances in the three countries diverge in significant ways. In particular, the financial profile of those ages 65 and older and their sources of income vary dramatically across the three nations. In the U.S., a relatively small share of older Americans’ income comes from government transfers, while in Italy, virtually all old-age income is derived from the government, and Germany falls in the middle on this measure. In addition, one-in-five people ages 65 and older in the U.S. are living in poverty, double the share of those in Germany and Italy.

This chapter explores the changing age structures in the U.S., Germany and Italy since 1950, as well as the projected trajectory of each country in the coming decades. In addition, it compares and contrasts the current economic situation of the young and the old in each country, as well as the sources of income for older adults across the three countries.

In the era immediately following World War II, the U.S. did not look so different from its European neighbors in terms of its age structure. However, since that time, the U.S. has been aging at a slower rate than Germany and Italy, due in part to its relatively high fertility and high rate of immigration. Both of these factors have buoyed the share of the U.S. population younger than age 65, and they will continue to do so, according to United Nations estimates. 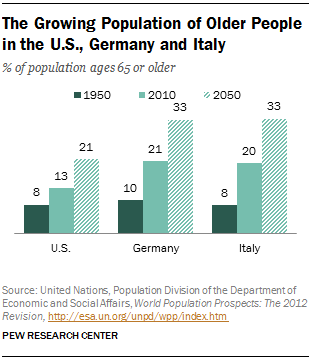 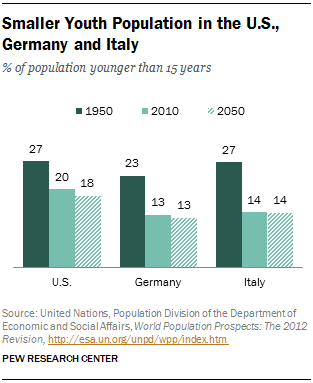 Continued increases in life expectancy, in the U.S. and elsewhere, have contributed to the rapid rise in aging populations. In 1950, the average U.S. life expectancy at birth was about 69 years. It now stands at 79 and is expected to increase even more, to about 84 by 2050. Germany and Italy have experienced even more rapid increases in life expectancy. While both countries had life expectancies below that of the U.S. in 1950, they now have surpassed the U.S. on this measure. Italians born in 2010 were expected to live until age 82 on average, and by 2050, their life expectancy may reach 88 years, according to UN projections. The same sources predict that a baby born in Germany in 2010 could expect to live until the ripe old age of 81, and by 2050 to 86 years.3 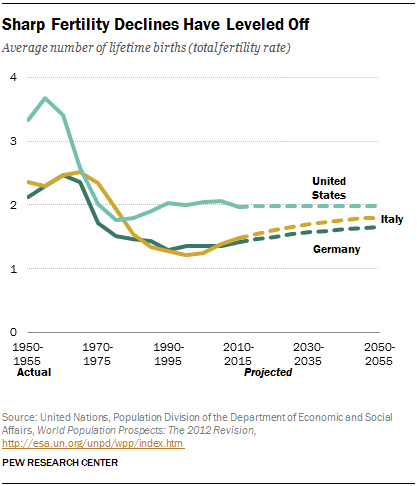 Financial Well-Being of the Young and Old

Since the enhancement of government-funded social programs such as Medicare in the mid-1960s, the welfare of older people in the U.S. has improved dramatically, while it has declined among young adults. For example, the share of older households in poverty dropped more than 20 percentage points between 1967 and 2010, while the share of households in poverty that are headed by someone age 35 or younger increased by more than 9 percentage points.5

Yet, even with improvements in financial well-being, the poverty rate among older U.S. adults remains much higher than among people ages 65 and older in Germany or Italy. About one-in-five older Americans are poor.6 This rate is almost twice as high as in Germany and Italy, where 11% of the older population is in poverty.

Income levels among older Americans vary widely, with some in this age group enjoying considerable wealth, even as others struggle economically. Thus, despite higher poverty rates, on average, people ages 65 or older in the U.S. are doing at least as well as their European counterparts, in terms of their incomes relative to the national mean income. All told, the incomes of U.S. adults ages 65 and older are equivalent to about 92% of the national average income, according to the Organization for Economic Cooperation and Development (OECD). This is similar to the situation of older people in Italy, whose income is 93% of the national average, and higher than the relative income of older people in Germany, which is about 85% of the national average.

This age gap in financial well-being accelerated in recent years, likely spurred by the fact that young adults were particularly hard hit by the Great Recession. In the U.S., 18- to 24-year-olds experienced the biggest increases in unemployment of any age group, by far. And even among those Americans who were able to find work during the recession, young adults experienced the largest declines in weekly earnings, losing 6% on average.

Meanwhile, young adults in Italy and Germany also suffered as a result of the economic downturn, and many are still struggling—especially in Italy. In 2013, among those ages 20 to 24, annual average unemployment in Italy was a staggering 37% (compared with 13% in the U.S. and 8% in Germany), according to the OECD.

Sources of Income for Older Adults 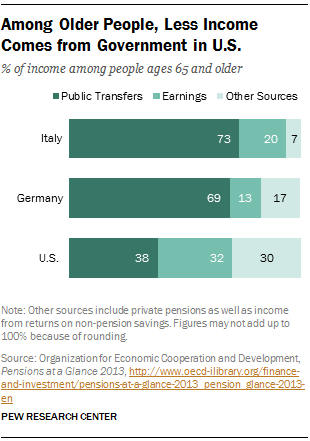 Demographic changes in Italy, Germany and the U.S. are placing a growing strain on these countries’ social security systems. All three systems are financed through worker contributions. In Europe, more than in the U.S., the growing number of older adults along with a shrinking pool of younger active contributors has made it difficult to fund pensions for current retirees.

Broadly speaking, the government-funded pension system in the United States is similar to that offered in Germany and Italy – for most people, it is based on lifetime earnings.7 However, the role that public transfers play in old-age income varies markedly by country.

Older adults living in the U.S. receive a smaller share of their income from the government than do older adults living in Italy and Germany. The OECD estimates that 38% of income among those ages 65 and older in the U.S. comes from public sources such as Social Security, while in Germany and Italy, about 70% of income comes from government transfers.8

In the U.S. today, a significant share of income among older adults (32%) comes from current earnings. In Italy, earnings comprise 20% of income for older people, and in Germany, they comprise only 13% of income among those ages 65 or older. These dramatic national differences in the importance of earnings among older people are driven, in part, by very different patterns of labor force participation. Among people ages 65 to 69, 30% are still employed in the U.S., compared with just 13% of those in Germany, and 8% of those in Italy.

An additional 30% of the income among older people in the U.S. comes primarily from private pensions, such as 401(k)s. In Germany, these sources comprise just 13% of older citizens’ income, and in Italy, just 7%.9

Family Support in Graying Societies
1. Demographic and Financial Profiles of People in the U.S., Germany and Italy
The Demographic ContextFinancial Well-Being of the Young and OldSources of Income for Older Adults
2. Supporting Family Members 3. The Aging Experience in the U.S., Germany and Italy 4. Caring for Aging Parents 5. Helping Adult Children 6. Keeping in Touch Across Generations About the Surveys