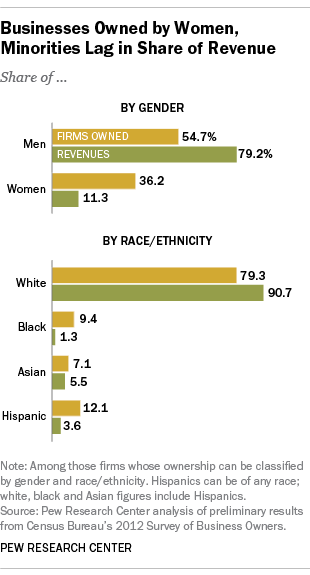 Women, blacks, Asians and Hispanics have built up substantial positions as business owners in several sectors of the U.S. economy. But based on revenue, those businesses are on average considerably smaller than white- or male-owned firms, according to a Pew Research Center analysis of recently released data from the U.S. Census Bureau.

Overall, men owned more than half of the nation’s 27.6 million firms in 2012, according to preliminary results from the Survey of Business Owners, and women owned more than 9.9 million businesses, about 36% of the total. The remaining 10% of firms were either jointly owned by men and women or could not be categorized by gender because they were publicly traded companies or have large, diverse ownership groups.

The data for the Census Bureau’s twice-a-decade survey includes all firms — incorporated or not, with and without paid employees — with receipts of $1,000 or more in 2012. A handful of firm types are excluded, including farms, railroads, funds and trusts, churches, foundations, civic groups and professional organization, the Postal Service and the Federal Reserve. About two-thirds of the 1.75 million businesses in the survey sample responded.

Women-owned firms made up sizable shares of some industries. For example, more than half of all firms in the health care/social assistance and educational services industries were owned by women in 2012. Women also owned more than half of the businesses in the miscellaneous “other services” category.

But women-owned firms didn’t earn a proportionate share of industry revenues. (The analysis is complicated by the fact that well over half of all business revenues go to a relatively small number of publicly held companies and other firms that aren’t classifiable by gender, race or ethnicity. For that reason, the sales comparisons that follow refer only to the 27.5 million firms that are classifiable in those ways.)

The combined sales of all women-owned firms in the country, for instance, were $1.6 trillion in 2012 – 11.3% of the $14.3 trillion in total receipts reported that year by all classifiable firms. Male-owned firms had 79.2% of total classifiable sales; those whose ownership was equally male and female had 9.5%.

Overall, about 29% of firms (nearly 8 million) were owned by blacks or Asians. About 12% were owned by Hispanics, who can be of any race.

The data show that some sectors more than others have a significant share of minority-owned firms. Nearly a fifth of health care/social assistance businesses and about 15% of transportation/warehousing businesses were owned by blacks. Asian Americans owned about 19% of firms in the accommodation and food services industry. (Note: The SBO defines “ownership” as having 51% or more of the stock or equity in the business. Also, all findings are based on preliminary data and may change when the Census Bureau releases final data in December.)

The financial risk to U.S. business owners posed by COVID-19 outbreak varies by demographic group
What is a 'closely held corporation,' anyway, and how many are there?
What we know about Cuba's economy
10 facts about American workers
5 facts about ethnic and gender diversity in U.S. newsrooms
10 key findings about Jewish Americans
Defining generations: Where Millennials end and Generation Z begins
Jewish Americans in 2020
Quiz: Are you a Core Conservative? A Solid Liberal? Or somewhere in between?
What We Know About Gen Z So Far