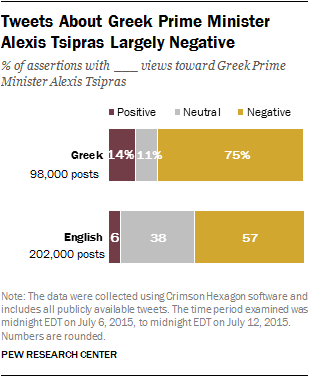 Greek Prime Minister Alexis Tsipras has found himself at the heart of the European drama surrounding the Greek debt crisis, and many around the world are voicing their opinions of Tsipras on the social media network Twitter. A new analysis of about 300,000 tweets in Greek and English, collected between July 6 and 12, finds that the conversation about the controversial leader has been primarily negative in tone, especially among those posting tweets in Greek.

On July 6, Tsipras entered a new round of negotiations with Greece’s creditors, representing a nation that on the previous day had voted 61% to 39% in a referendum to reject the conditions for a new bailout. But despite the referendum result, and despite the Greek prime minister’s often-defiant tone, Tsipras agreed to a new bailout deal this past week, including additional austerity measures and strict reforms opposed by many Greeks.

Twitter offers one window into the reaction to Tsipras’ handling of the situation. Our analysis of the conversation unfolding on the social network finds some differences between English- and Greek-language tweets, but little in either language that is favorable to the prime minister.

Among Greek-language tweets studied, 75% of the conversation expressed negative sentiment about Tsipras, while 14% was positive and 11% was neutral. The Twitter activity in English was considerably larger in volume than that in Greek, and it contained a larger share of neutral discussion, but the same general pattern held. More than half (57%) of the English-language conversation about Tsipras was negative, while just 6% was positive (38% was neutral in tone). 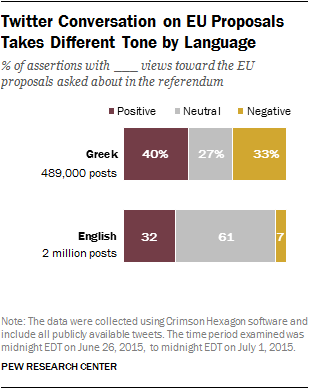 In an earlier analysis of the Twitter conversation leading up to the Greek referendum over whether to accept the European Union’s austerity measures, Pew Research Center found that the conversations in Greek and English reveal major differences in both tone and focus.

Among Greek-language tweets studied, 40% of the conversation included positive expressions about the EU proposals on the referendum calling for a financial bailout that would likely include new austerity measures, while 33% was negative and 27% was neutral. The stakes are high and yet also still unclear – a “no” vote could lead to a possible exit from the eurozone or a fresh start for the negotiations.

A majority of the English-language conversation about the referendum was neutral (61%), but within the portion of the conversation that carried any tone, the positive (32% of the total conversation) outweighed the negative (7%).

Our analysis included nearly 2.5 million tweets in both languages posted between June 26 (following the prime minister’s referendum announcement) and July 1.

Although not a replacement for scientific public opinion polling, social media analysis can provide valuable insight into public views on a subject. According to our surveys, 23% of online adults use Twitter in the U.S. It’s unclear what share of the public in Greece uses Twitter, but nearly a third of the Greek population uses social networking sites, including Twitter, at a daily or near-daily rate, according to the latest Eurobarometer. (Our analysis did not compare Twitter users based on their location, but rather, by language.) 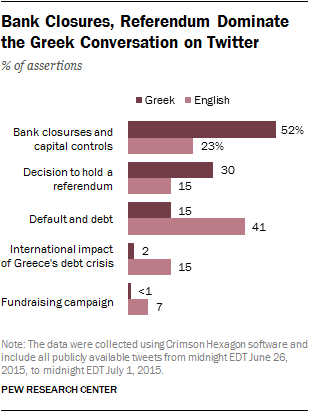 In English, the Twitter conversation mainly focused on the country’s loan defaults, the multinational negotiations and the late payments to the International Monetary Fund (IMF) – which together accounted for 41% of tweets analyzed. Nearly a quarter (23%) of the English-language conversation focused on the bank closures on June 29. The conversation about the decision to hold the referendum and the impact of Greece’s debt crisis on foreign markets each accounted for 15% of the conversation, while 7% focused on a crowdfunding campaign started in London that aimed to raise money to bail out Greece.

About one-third of the conversation (30%) was focused on the upcoming referendum, while 15% of the discussion was dedicated to the default and the late payments to the IMF. Just 2% of the conversation was related to the impact that Greece’s debt crisis has on foreign markets. The crowdfunding Kickstarter campaign was almost nonexistent.

What is behind the differences between the Greek and English conversations? It may be that those tweeting in Greek are more likely to be experiencing the events taking place in Greece firsthand, whereas those tweeting in English may be following the story from abroad. Regardless of language, neither conversation is unanimous in its hopes for the Greek future.

Note: This post was originally published on July 3, 2015, and was updated on July 15 to include an analysis of tweets about Greek Prime Minister Alexis Tsipras. See our full methodology.

As Greeks head to the polls, the Twitter conversation differs by language
How do Americans use Twitter for news?
Greek election reflects country’s differences with the EU
On Twitter: Anger greets the Zimmerman verdict
5 facts about Greece and the EU