As the world reacts to today’s nuclear agreement between the U.S. and its allies and Iran, a new 40-nation Pew Research Center survey finds that concern over Iran’s nuclear program is greater in the United States and Israel than among other global publics. 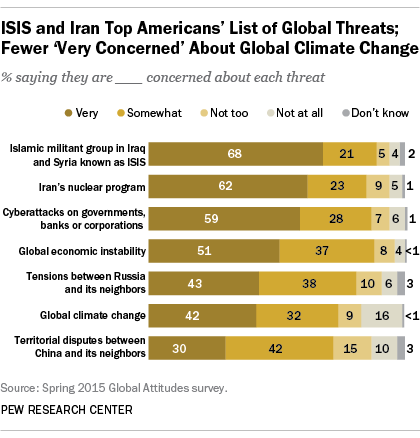 In the U.S., 62% say they are very concerned about Iran’s nuclear program, with only ISIS ranking as a greater danger among seven global threats tested. About seven-in-ten Americans (68%) say they are very concerned about ISIS. Israelis rate Iran’s nuclear program as the single greatest global threat compared with other issues, with 53% registering a high level of concern.

Spain is the only other country included in the survey in which as many as half (52%) say they are very concerned about Iran’s nuclear program. The survey was conducted in 40 countries among 45,435 respondents from March 25 to May 27, amid negotiations over the Iran agreement.

Americans also have very different views about other global threats, such as cyberattacks and climate change, than do many other publics around the world. Nearly six-in-ten Americans (59%) are very concerned about cyberattacks. South Korea is the only other nation in which a majority (55%) views the threat of cyberattacks as a major concern. 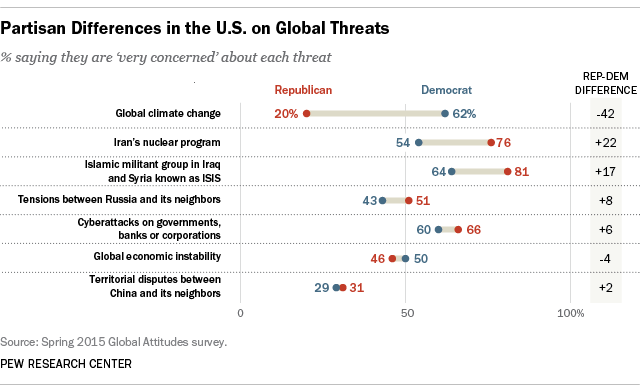 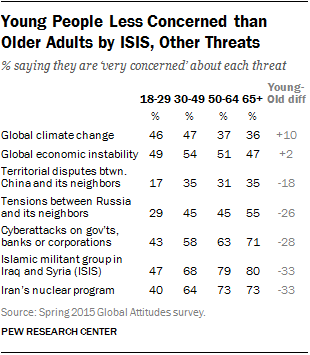 There are also sizable age differences in the perceptions of global threats among the American public, a phenomenon that is seen in other advanced economies. No single threat stands out as a top concern for those younger than 30: 49% say they are very concerned about global economic instability, while nearly as many say the same about ISIS (47%) and global climate change (46%).