One constant in the debate over policing and race in the U.S. is how differently the issue is viewed by blacks and whites.

Pew Research Center polling has consistently found that blacks and whites have very different views about many aspects of race overall — from confidence in the police to progress on racial equality. For example, 48% of whites said a lot of progress has been made since 1963, compared with 32% of blacks, according to a 2013 survey conducted just before the 50th anniversary of Martin Luther King Jr.’s March on Washington.

But the views on how police deal with minorities stands in particularly sharp relief: In a survey shortly after the Ferguson shooting, 80% of blacks said the incident raised important issues about race, compared with 37% of whites. 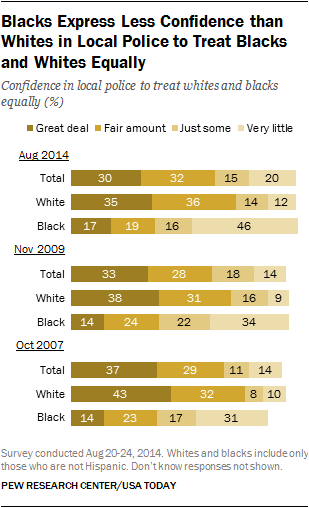 That finding was consistent with a survey conducted a week later in which blacks expressed far less confidence than whites in local police to treat both races equally. About seven-in-ten whites (71%) expressed a great deal or fair amount of confidence in local police to treat blacks and whites equally, compared with just 36% of blacks. Those differences were long-standing: The gaps were similarly wide when the question was asked in 2009 and 2007.

Blacks and whites differed on other measures of police performance in that poll. Seven-in-ten blacks said police forces across the country did a poor job of holding officers accountable when misconduct occurred, compared with 27% of whites. About six-in-ten blacks (57%) rated police performance as poor when it came to using the right amount of force for each situation, compared with 23% of whites who held that view.

More recent polls by news organizations paint a similar picture, including an ABC News/Washington Post poll and a McClatchy-Marist poll, both conducted in December. The McClatchy-Marist survey reported that 76% of blacks, compared with 33% of whites, believed there was a problem with the justice system when it comes to law enforcement and race. The survey also found that half of whites had a great deal of confidence in the police to gain the trust of those they serve, compared with only 22% of African Americans.

There is also a sense of pessimism about whether things would get better, according to a December Pew Research survey. About half (52%) of blacks expected relations between local police and minorities to worsen over the next year, while 31% said they would remain about the same and only 16% predicted improvement. While fewer whites (34%) saw relations getting worse, only 21% expected improvement and 43% said things would remain the same.