The American public has had a muted response when it comes to concerns about possible government monitoring of their digital behavior, and many have not yet adopted – or are even aware of – many of the tools available to protect their online privacy and security, according to a new Pew Research Center study.

But it is a different story for a group like investigative journalists, whose work makes them potential targets for monitoring. 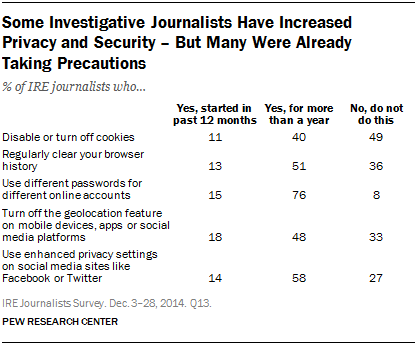 In our survey of U.S. members of Investigative Reporters & Editors, most of the investigative journalists assume that they are being monitored because of the nature of their work: 64% believe that the government probably collected their communications data.

And many have long since adopted various privacy and security measures. Most notably, 76% of the investigative journalists said they had been using a variety of passwords for more than a year, and 58% had been using enhanced privacy settings on social networking sites.

In addition, 59% of IRE reporters (a subset of the larger group of journalists) say that, to protect sources’ anonymity, they meet in person instead of using electronic communication – a decidedly non-digital form of security. Nearly half (48%) have done so for more than a year.

For this group of investigative journalists, there is far more concern about decreasing resources in newsrooms – the top-ranked issue they feel the profession is facing today.

In a different set of questions asked of the general public, 52% said they were very or somewhat concerned about government surveillance of Americans’  data and electronic communications, but a significant share – 46% – expressed little or no concern.

For those Americans who had heard about the surveillance programs, a minority had made any of the behavior changes included in the survey. Fewer than on-in-five who had heard about the programs reported changing privacy settings on social media (17%), avoiding using certain apps (15%), using social media less often (15%), speaking more in person than online or over the phone (14%), uninstalling certain apps (13%), avoiding the use of certain terms in online communication (13%), avoiding the use of some terms in search engine queries (11%), deleting social media accounts (8%), or making more phone calls instead of communicating online (8%). Overall, one-in-three (34%) who had heard about the programs say they have changed at least one of these behaviors since learning about the government monitoring programs.

Yet, even though many of the journalists surveyed believe they are vulnerable to surveillance, at least some echoed the lower key reactions expressed by some in the general public. “Unless you are a national security reporter or a reporter really taking on the feds, [there’s a] very small to non-existent risk,” said one journalist in response to an open-ended question. (You can see more quotes from investigative journalists at our interactive.)