The Pew Research Center surveyed thousands of people across 32 emerging and developing nations about their technology use and how the rising influence of the internet affects their daily lives. But beyond the larger findings, we found some notable data points about specific countries that might have been lost in the fray. 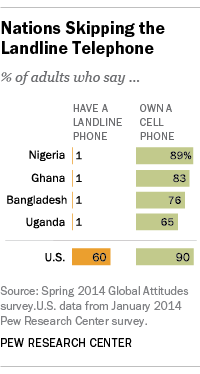 2Chinese internet users love to shop. About half of online Chinese (52%) have used the internet to buy products in the past 12 months. Given the size of the online Chinese marketplace, this goes a long way in explaining the meteoric rise of commerce giants such as Alibaba and Baidu.

5Young Thais are internet enthusiasts. In every country we polled, younger people ages 18 to 34 are substantially more likely to say they use the internet than those who are older. Especially large differences occur in Asia, and particularly in Thailand, where 83% of 18- to 34-year-olds are online, but only 27% of those 35 and older are.

6Politics is a big social media topic in Lebanon. Among Lebanese who use social networks, an astounding three-quarters say they use the platform for discussing politics. Similar levels of political participation occur among social network users in Egypt (66%) and Jordan (63%). Across all the countries surveyed with sufficient numbers, only a median of 34% say they talk politics using social media, including 16% of Filipino and Vietnamese social networkers and 19% of Indonesians.

7Ukrainians get their political news online. Overall, a median of 54% of internet users across emerging and developing countries surveyed use the internet to get political news and information. But in Ukraine that figure is much higher: Eight-in-ten internet users do so. The survey was fielded after the ousting of President Viktor Yanukovych from office in early 2014 and toward the beginning of the ongoing conflict with Russian-backed rebels in eastern Ukraine, meaning many Ukrainians followed those news events online. However, only 53% of Ukrainians have access to the internet.

9Venezuelans like taking pictures and videos with their phones. Overall, Latin Americans (just like in the U.S.) are the quite keen on capturing the world around them, with more than six-in-ten mobile owners in Chile, Mexico, Argentina, Brazil and Nicaragua saying they have taken videos or pictures with their phones in the past year. In Venezuela, this is particularly common: Three-quarters of cell phone owners (who constitute 88% of the adult population) use their device to take pictures or video.

10Many Poles access medical information online, especially women. More than six-in-ten internet users in Poland (64%) say they have gotten health information online in the past 12 months. This includes 72% of female internet users, but only 56% of male users. Similar gender gaps are found in the U.S., and also in Russia and Ukraine.