Nearly all LGBT Americans support same-sex marriage, but enthusiasm for this new legal change now under review by the U.S. Supreme Court isn’t as uniform as one might think. While the rising level of support for same-sex marriage among the general public is well known and now stands at 52%, less known are the views among the country’s lesbian, gay, bisexual and transgender adults.

Here are some key facts: 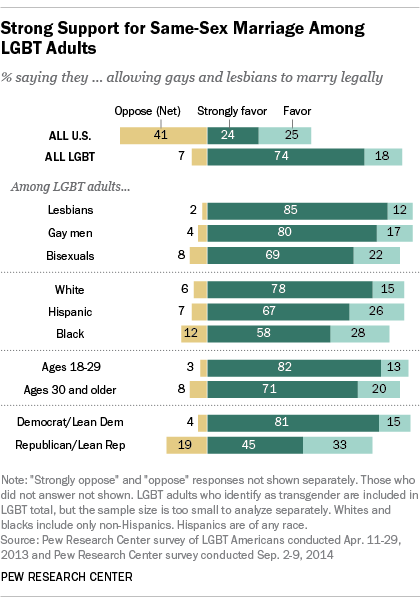 Just like the general public, support for same-sex marriage differs among LGBT adults along party lines. Among LGBT adults who identify with or lean toward the Republican Party, support for gay marriage is not as strong as it is among Democrat LGBT adults, according to a 2013 Pew Research Center survey. A strong majority of LGBT adults of both parties favored allowing gays and lesbians to marry legally, with 78% of those who lean Republican saying they “strongly favor” or “favor” same-sex marriage compared with 96% who said the same among Democrats.

3Among the unmarried, LGBT Americans are more likely than the general public to say they want to get married, by 52% to 46%. Today, same-sex marriage is legal in 36 states and the District of Columbia. (When we surveyed 1,197 LGBT adults in 2013, it was legal in 17 states and D.C.) Just a fraction of LGBT adults we surveyed were married (16%) — most of them bisexuals in opposite-sex relationships — compared with half of all U.S. adults.

5LGBT Americans are split on the best way to achieve equality. About half (49%) said equality can be achieved while maintaining a distinct LGBT culture, while another 49% said it’s reached by becoming part of mainstream institutions like marriage.