Young adults who would like to get married naturally start looking for love in the community they live in, but in some parts of the country, the odds may be against them. A new Pew Research Center analysis finds pronounced differences in the ratio between men and women living in the largest U.S. metro areas, especially when it comes to singles who have an attractive characteristic: a job. 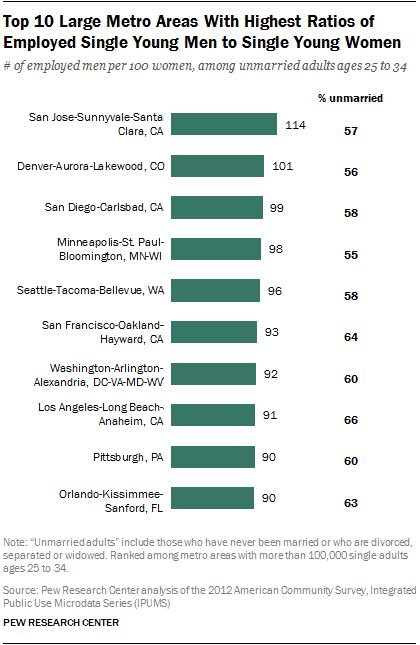 Our poll published last week found that half (53%) of never-married Americans would like to eventually tie the knot. And among never-married women interested in marriage, 78% said that it is “very important” to them that a potential spouse has a steady job (only 46% of never-married men said the same). Looking at the most recently available census data, we explored the demographics of the “marriage market” based on what women said they want in a spouse.

Nationwide, single young men outnumber their female counterparts. The overall male-to-female ratio is 115:100 among single adults ages 25 to 34. But when we limit the young men to those who are currently employed, the ratio falls to 84 employed single men for every 100 single women. (We count both young adults who have never been married and those who have been previously married as single or unmarried.)

So, which large metro areas have the best “marriage market”? For women seeking a male partner with a job, our analysis found that San Jose, Calif., tops the list among large metro areas, with 114 single employed men for every 100 single women. Among all single young adults, there were 141 men for every 100 women in this area. Over half (57%) of young adults ages 25 to 34 in the metro area, which includes Sunnyvale and Santa Clara, were single in 2012.

(Our Mapping the Marriage Market interactive displays the results of all available U.S. metro areas, as well as the reverse ratios of employed women to men and all men to all women.) 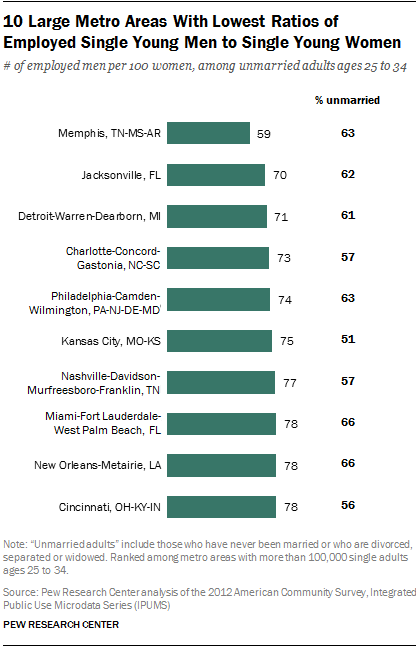 Memphis, Tenn., tops this list: only 59 employed young single men for every 100 young single women. Some other metro areas in the bottom ten include Jacksonville, Fla.; Detroit, Mich.; Charlotte, N.C.; and Philadelphia, Pa.

Note: The metro ranking is based on 43 metro areas with more than 100,000 unmarried young adults ages 25 to 34. You can find a more complete list of metropolitan areas on our map.