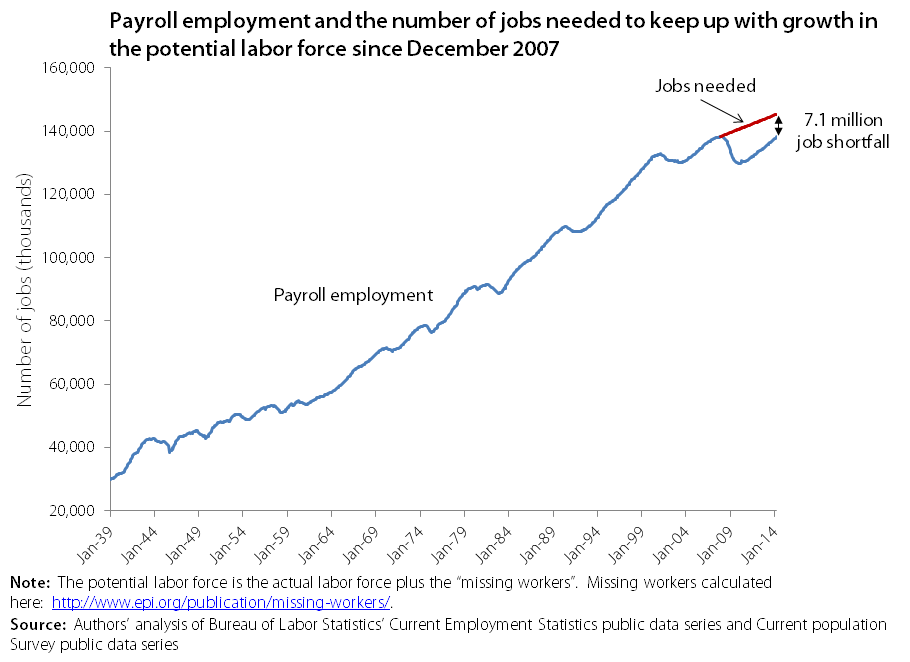 According to today’s employment report, the U.S. finally — after six and a half years — has more jobs than it did before the housing crash and subsequent global financial crisis cratered the economy. After adjusting for seasonal variation, there were 138,463,000 nonfarm payroll jobs in May — surpassing the pre-recession peak of 138,365,000 in January 2008.

But while the country may have climbed out of the deepest jobs hole since the Depression, that hardly means everything is peachy. There are about 15 million more working-age people now than there were in January 2008, but essentially the same number of jobs. Only 58.9% of the adult population is employed, four percentage points below the level in January 2008.

As the above chart from the Economic Policy Institute (prepared before today’s jobs report) shows, the economy is still some 7 million jobs short of what it would need for the employment-to-population ratio to reach its pre-recession level. EPI economist Heidi Shierholz commented, “We are far, far from healthy labor market conditions.”

The long, grueling recession likely did permanent damage to the U.S. economy, according to a new paper by Hoover Institution scholar Robert Hall. Hall estimates that last year, total economic output was 13% below its long-term trend, mainly due to four factors: continuing unemployment and under-employment, underinvestment in businesses’ capital stock, lower labor-force participation, and reduced overall productivity. While the first two factors should eventually return to normal, Hall concludes, he’s pessimistic about the latter two.