Although Huffington Post, BuzzFeed and Ezra Klein’s new Vox.com generate considerable attention as representatives of the digital media future, they are in fact, not typical representatives of the native digital news landscape.  A new Pew Research Center State of the News Media analysis finds that the growing digital news world is largely comprised of hundreds of smaller sites, often local in scope, that are  working to fill gaps left by legacy reporting cuts. 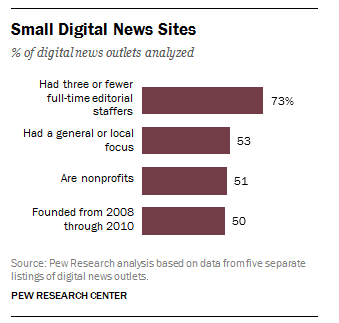 While there is variation within this universe of digital native news outlets, our  analysis of 438 of them has found that many fit a different composite: The typical outlet is between four and six years old; editorially, it is focused on coverage of local or even neighborhood-level news; it is just as likely to operate as a nonprofit organization as for-profit model; and it has a lean full-time editorial staff of three or fewer people.

In total, these small digital operations have created about 2,000 of the roughly 5,000 full-time editorial jobs we identified in the digital news world, and they represent a growing and increasingly important part of a shifting media ecosystem. Here’s what they’re like: