Last week’s vote by workers at Volkswagen’s Chattanooga, Tenn. plant against joining the United Auto Workers union — despite VW’s tacit encouragement — points up the challenges faced by U.S. organized labor. Even though unions retain much public support, the share of American workers who actually belong to one has been falling for decades and is at its lowest level since the Great Depression.

In a Pew Research Center survey conducted in June 2013, about half (51%) of Americans said they had favorable opinions of labor unions, versus 42% who said they had unfavorable opinions about them. That was the highest favorability rating since 2007, though still below the 63% who said they were favorably disposed toward unions in 2001. In a separate 2012 survey, 64% of Americans agreed that unions were necessary to protect working people (though 57% also agreed that unions had “too much power”).

As of last year, however, only 11.3% of wage and salary workers belonged to unions, down from 20.1% in 1983, according to the Bureau of Labor Statistics. (At their peak in 1954, 34.8% of all U.S. wage and salary workers belonged to unions, according to the Congressional Research Service.) While the unionization rate among public-sector workers has held fairly steady over that 30-year span (just over a third of government workers are unionized), it’s plummeted in the private sector — from 16.8% in 1983 to 6.7% three decades later. The reasons for that decline are many and heatedly debated — from the impact of globalization on U.S. manufacturing to intense hostility from businesses to unions’ relative lack of success in organizing service- and information-industry workers. 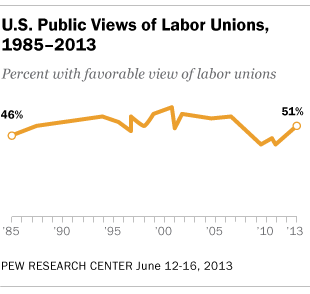 The South long has been the nation’s least-unionized region; all but one state of the old Confederacy had a unionization rate below 6.5% in 2013 (in the lone exception, Alabama, 10.7% of workers belonged to a union, still below the national rate). Historically, the South also has been the region least favorably disposed toward organized labor: In 1987, according to Pew Research’s American Values Survey, 59% of Southerners agreed that unions were necessary, compared with 65% in the West and 74% in the Northeast and Midwest.

But since then, as unionization has fallen nationally, other regions have come to look more like the South. In the 2012 American Values Survey, the share of people agreeing that unions were necessary had barely budged in the South (60%) and West (64%), but had fallen markedly in the Midwest (65%).