Marriage is back – at least, a little bit, and with some caveats. Recently released Census data indicate that the number of new marriages in the U.S. went up in 2012, reversing a three-year decline. Since marriage is tied to economic mobility, some economists may interpret this development as a small sign that shows the U.S. economy is improving. But a closer look at the data shows some reason for caution.

Is the uptick in newly married adults due to the national economic recovery that officially began in June 2009?  It is certainly possible. There’s already a fairly vigorous debate about to what extent marriage and divorce are affected by economic activity.  Some researchers have shown that marriage rates did not decline significantly during the Great Recession.  And others have cautioned that it is difficult to conclude that the recession accelerated the retreat from marriage , so it seems premature to assert too much from the new data. 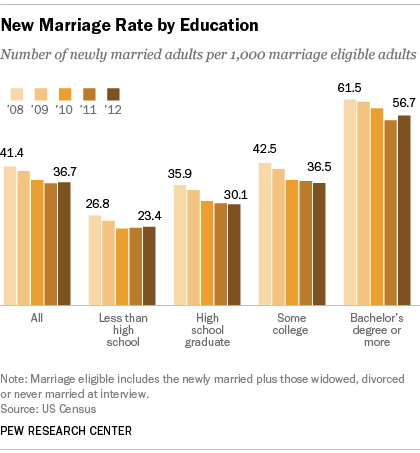 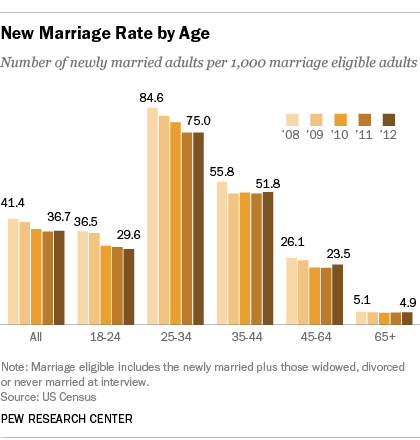 How does the one year change in the number of newlyweds fit into the larger context of marriage trends in America?  The new marriage data provide insights on entry into marriage and not the stability of marriage.  The long-run trends on entry into marriage clearly show that less-educated adults have become less likely to ever get married.  Consider marital outcomes among 35- to 39-year-olds.  In 2012, 73% of 35- to 39-year-olds without a bachelor’s degree had ever married.  By contrast, 92% of this group had ever married in 1950.

So the recent slide in new marriages among less-educated adults is part of a long-run decline in entry into marriage among these adults. 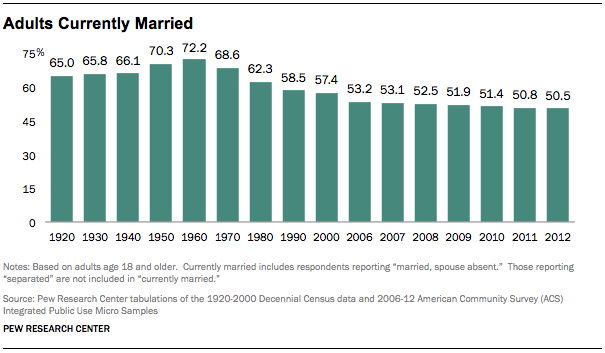