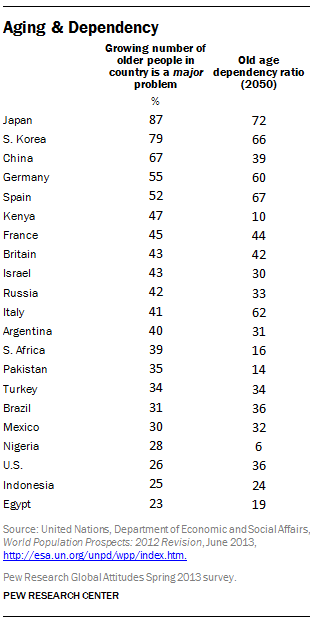 An aging population is a looming economic and social burden, particularly in Europe and Northeast Asia, and to a lesser extent in the United States. In many of these societies, the public recognizes the problem. How this recognition affects the emerging politics of global aging — the allocation of scarce fiscal resources to pay for the pensions and health care of the elderly – could prove a defining issue in graying economies around the world for decades to come.

In their views about their own aging population, Americans, in particular, stand out. They are less worried than most Europeans and Asians, reflecting the demographic reality that the U.S. population is aging more slowly. Nevertheless, Americans’ degree of concern mirrors that in much younger societies, suggesting they may not fully appreciate their aging challenge.

One way demographers measure the economic impact of aging is by the “old-age dependency ratio”: the number of people age 65 and older per 100 working age people (age 15-64). (The higher the number, the more elderly people there are to be supported by younger working adults.) That proportion is rising around the world. By 2050 it will be particularly high in Japan, where the United Nations projects there will be 72 elderly for every 100 working age Japanese, up 36 percentage points from 2010. In neighboring South Korea, the increase may be even greater, up 51 percentage points from 2010 to an old-age dependency ratio of 66 by mid-century.

But aging is also an issue in Europe. Spain’s old-age dependency ratio may rise 42 percentage points to 67 within four decades. And Italy’s may rise 31 points to 62.

Publics in many aging societies understand they face a challenge. Nearly nine-in-ten Japanese (87%) and eight-in-ten South Koreans (79%) say aging is a major problem in their society, according to a new Pew Research Center survey. Two-thirds of the Chinese (67%) see a major problem, possibly a recognition that the Chinese old-age dependency ratio may rise 28 percentage points to 39 by 2050.

Read the full report: Attitudes about Aging: A Global Perspective

Americans are aging, but not as fast as people in Germany, Italy and Japan

Who are Europe’s Millennials?