At a time when the global population of people ages 65 and older is expected to triple to 1.5 billion by mid-century, public opinion on whether the growing number of older people is a problem varies dramatically around the world, according to a Pew Research Center survey.

Concern peaks in East Asia, where nearly nine-in-ten Japanese, eight-in-ten South Koreans and seven-in-ten Chinese describe aging as a major problem for their country. Europeans also display a relatively high level of concern with aging, with more than half of the public in Germany and Spain saying that it is a major problem. Americans are among the least concerned, with only one-in-four expressing this opinion.

These attitudes track the pattern of aging itself around the world. In Japan and South Korea, the majorities of the populations are projected to be older than 50 by 2050. China is one of most rapidly aging countries in the world. Germany and Spain, along with their European neighbors, are already among the countries with the oldest populations today, and their populations will only get older in the future. The U.S. population is also expected to get older, but at a slower rate than in most other countries.

Public concern with the growing number of older people is lower outside of East Asia and Europe. In most of these countries, such as Indonesia and Egypt, the proportion of older people in the population is relatively moderate and is expected to remain so in the future.

Pakistan, Nigeria and other countries potentially stand to benefit from future demographic trends. These are countries that currently have large shares of children in their populations, and these children will age into the prime of their work lives in the future.

The Pew Research survey also finds a wide divergence in people’s confidence that they will have an adequate standard of living in their old age. Confidence in one’s standard of living in old age appears to be related to the rate at which a country is aging and its economic vitality. Confidence is lowest in Japan, Italy and Russia, countries that are aging and where economic growth has been anemic in recent years. In these three countries, less than one-third of people are confident about their old-age standard of living. Meanwhile, there is considerable optimism about the old-age standard of living among the public in countries whose populations are projected to be relatively young in the future or that have done well economically in recent years, such as in Nigeria, Kenya, South Africa and China.

Rarely do people see retirement expenses as mainly a personal obligation. In only four countries—South Korea, the U.S., Germany and Britain—do more than one-third of the public say that the primary responsibility for the economic well-being of people in their old age rests with the elderly themselves.

American public opinion on aging differs dramatically from the views of the nation’s major economic and political partners. Americans are less likely than most of the global public to view the growing number of older people as a major problem. They are more confident than Europeans that they will have an adequate standard of living in their old age. And the U.S. is one of very few countries where a large plurality of the public believes individuals are primarily responsible for their own well-being in old age.

This is not because the U.S. is perennially young. American baby boomers are aging, and one-in-five U.S. residents are expected to be 65 and older by mid-century, greater than the share of seniors in the population of Florida today.1 It is also projected that the share of people 65 and older in the U.S. will eclipse the share of children younger than 15 by 2050.

But the U.S. is aging less rapidly than most of the other countries. In 2010, the global median age (29) was eight years lower than the U.S. median age (37).2 By 2050, the difference in age is projected to narrow to only five years. Also, driven by immigration, the U.S. population is expected to increase by 89 million by mid-century even as the populations of Japan, China, South Korea, Germany, Russia, Italy and Spain are either at a standstill or decreasing. For these reasons, perhaps, the American public is more sanguine than most about aging.

The aging of populations does raise concerns at many levels for governments around the world. There is concern over the possibility that a shrinking proportion of working-age people (ages 15 to 64) in the population may lead to an economic slowdown. The smaller working-age populations must also support growing numbers of older dependents, possibly creating financial stress for social insurance systems and dimming the economic outlook for the elderly.

Graying populations will also fuel demands for changes in public investments, such as the reallocation of resources from the needs of children to the needs of seniors. At the more personal level, longer life spans may strain household finances, cause people to extend their working lives or rearrange family structures.3 Perhaps not surprisingly, an aging China announced a relaxation of its one-child policy in November 2013.

This study reports on the findings from a Pew Research Center survey of publics in 21 countries. The surveys, conducted from March 3 to April 21, 2013, and totaling 22,425 respondents,4 gauged public opinion on the challenges posed by aging for the country and for the respondents personally. The report also examines trends in the aging of the global population, the U.S. population, and the populations in 22 other selected countries.5 The focus is on changes from 2010 to 2050, as projected by the United Nations (UN) in its latest World Population Prospects, the 2012 revision, released in June 2013.6 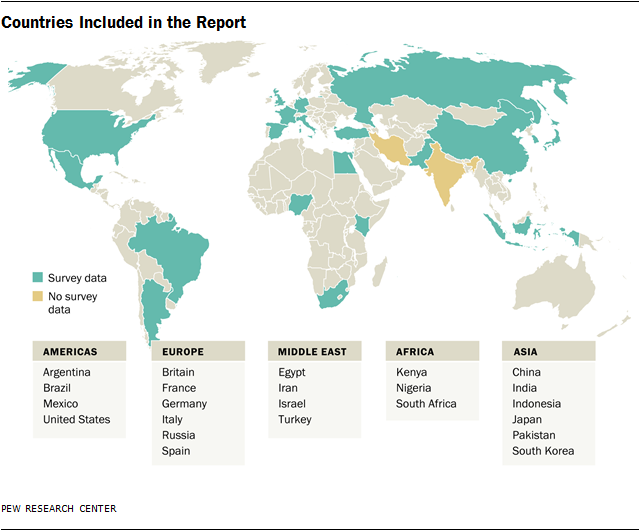 The global population is on the brink of a remarkable transformation. Thanks to the aging of today’s middle-aged demographic bulge and ongoing improvements in life expectancy, the population of seniors is projected to surge, increasing from 530.5 million in 2010 to 1.5 billion in 2050. The result will be a much older world, a future in which roughly one-in-six people is expected to be 65 and older by 2050, double the proportion today.

The population of children, meanwhile, will be at a virtual standstill due to long-term declines in birth rates around the world. The number of children younger than 15 is expected to increase by only 10%, from 1.8 billion in 2010 to 2 billion in 2050.7 Consequently, the global share of the population that is 65 and older will double, from 8% in 2010 to 16% in 2050. And, more countries will find that they have more adults ages 65 and older than they have children younger than 15.

The graying of the world’s population in the aggregate conceals some important variations. Japan, China, South Korea and many countries in Europe are expected to have greater numbers of people dependent on shrinking workforces, a potentially significant demographic challenge for economic growth. However, aging elsewhere, such as India and several African countries, mostly means the aging of children into the workforce. That is a potentially favorable demographic trend for economic growth. Thus, the coming changes in world demography conceivably could alter the distribution of global economic power over the coming decades.

For the United States, population trends may lead to greater opportunities in the global economy of the future. Although the U.S. population is anticipated to turn older and grow at a slower rate in the future, it is projected to increase at a faster pace and age less than the populations of most of the rest of the developed world. Thus, to the extent that demography is destiny, the U.S. may be in a position to experience a more robust economic future in comparison with other developed nations.

Aging in Major Regions of the World

In the future, aging and slower rates of growth are expected to characterize the populations of all major regions in the world. Ranked by median age, Europe is currently the oldest region in the world and should retain that distinction in 2050. However, Latin America and Asia are projected to age the most rapidly through 2050. It is expected that the median age in Latin America, currently 10 years lower than the median age in North America, will match North America’s age level by 2050. Africa will continue to have the youngest population in the world.

Aging in the U.S. and Other Countries

Across the countries examined in this report, projections show that the U.S. population will grow at a faster rate than the populations of European and several East Asian and Latin American countries. Countries whose populations should grow at rates slower than in the U.S. include Brazil, Argentina, Britain, France, Spain, China, South Korea and South Africa. Some countries—Russia, Germany, Italy and Japan—are projected to experience reductions in their populations.

Nations expected to experience relatively rapid population growth are located mostly in Africa. Most notably, Nigeria’s population is projected to nearly triple and to overtake the U.S. population by 2050. Kenya is expected to more than double its population from 2010 to 2050. Pakistan, Egypt and Israel are expected to grow at much faster rates than the U.S. The populations of Mexico, India, Indonesia and Iran should increase at rates that are slightly higher than in the U.S.

The median age and the share of the population ages 65 and older also is projected to increase in other countries, sharply in China, South Korea, Mexico and Brazil, among others. Also, the total dependency ratio—the size of the “dependent” population (those younger than 15 or older than 64) relative to the “working age” population (ages 15 to 64)—is projected to rise in most countries. This means that future demographic conditions may not support the same rates of economic growth experienced in those countries in the past.

A handful of countries, even as their populations age, are poised to experience a potential demographic boost to their economies. The total dependency ratios in Egypt, India, Pakistan, Nigeria, Kenya and South Africa should decrease in the future, a consequence of their currently large youth populations aging into the workforce. This demographic transition is potentially a boon for economic growth. But, because these countries will also experience rising proportions of seniors in their populations, they will not be entirely immune to the social and economic challenges posed by an aging citizenry.

OverviewGlobal Trends in AgingAging in Major Regions of the WorldAging in the U.S. and Other CountriesPension and Health Care Expenditures