Pope Francis is creating a new commission to advise the Vatican on how to deal with the ongoing clergy sex abuse scandal, which continues to make headlines in the U.S. 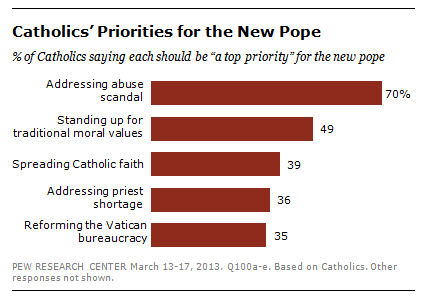 Effects from the scandal continue to ripple across the U.S. Catholic landscape. On Thursday, the same day Boston Cardinal Sean O’Malley announced the commission’s formation, the Archdiocese of St. Paul and Minneapolis released a list of more than 30 priests it says have been credibly accused of sexually abusing minors.

The Vatican’s announcement comes after some recent criticism of the pope for not moving more forcefully to confront the problem.

Most Catholics in the U.S. say the sex abuse scandal is one priority they want Francis to address. After the new pope was elected in March, 70% of U.S. Catholics said that addressing the abuse scandal should be “a top priority” for him – more than any other potential priority listed in a Pew Research survey.

Similarly, in response to an open-ended question about “the most important” problem facing the Catholic Church today, far more U.S. Catholics mentioned the abuse scandal (34%) than any other issue.

Francis is the third pope to address the clergy sex abuse scandal in the last decade. When his predecessor, Pope Benedict XVI, announced plans to step down in February, one-third (33%) of American Catholics said Benedict did an excellent or good job addressing the scandal, while nearly twice as many (63%) said he did only a fair or poor job.