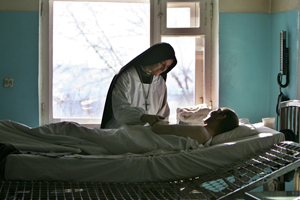 As the Roman Catholic Church prepares for a conclave to elect a new pope, Catholics in the United States tend to view the scandal over sex abuse by clergy as the most important problem facing their church today. Asked to say in their own words what they think is the Catholic Church’s most important problem, 34% of U.S. Catholics mention sex abuse, pedophilia or some other reference to the scandal. No other problem garners more than 10% of responses. When asked about the main way the church helps society today, U.S. Catholics most commonly refer to charitable efforts to aid the poor, feed the hungry and heal the sick. 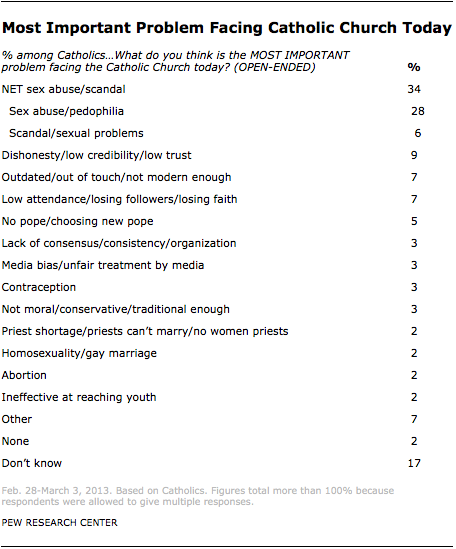 More than a quarter of U.S. Catholics (27%) say the most important way the Catholic Church helps society today is by serving those in need through charitable works. This includes those who cite efforts by Catholics in general to help the poor, feed the hungry and heal the sick as well as those who mention Catholic Charities or other organizations providing services in the United States or overseas. 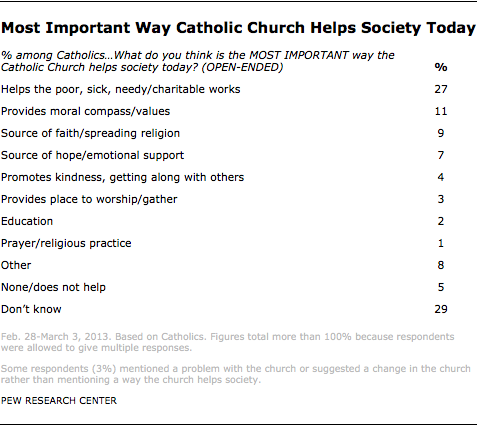 About one-in-ten U.S. Catholics say the church’s most important contribution to society is providing moral guidance and values (11%). A similar percentage (9%) say the church helps society the most by acting as a source of faith and spreading Christianity or the Catholic faith.

Nearly three-in-ten U.S. Catholics decline to offer an opinion or say they don’t know what is the most important way that the Catholic Church helps society today (29%).

The analysis in this report is based on telephone interviews conducted Feb. 28 through March 3, 2013, among a national sample of 1,003 adults, 18 years of age or older, living in the continental United States (501 respondents were interviewed on a landline telephone and 502 were interviewed on a cell phone, including 228 who had no landline telephone). The survey was conducted by interviewers at Princeton Data Source under the direction of Princeton Survey Research Associates International. A combination of landline and cell phone random digit dial samples were used; both samples were provided by Survey Sampling International. Interviews were conducted in English. Respondents in the landline sample were selected by randomly asking for the youngest adult male or female who is now at home. Interviews in the cell sample were conducted with the person who answered the phone, if that person was an adult 18 years of age or older. For detailed information about the survey methodology, see http://pewresearch.org/politics/methodology/

The combined landline and cell phone sample are weighted using an iterative technique that matches gender, age, education, race, Hispanic origin and region to parameters from the 2011 Census Bureau’s American Community Survey and population density to parameters from the Decennial Census. The sample also is weighted to match current patterns of telephone status, based on extrapolations from the 2012 National Health Interview Survey. The weighting procedure also accounts for the fact that respondents with both landline and cell phones have a greater probability of being included in the combined sample and adjusts for household size among respondents with a landline phone. Sampling errors and statistical tests of significance take into account the effect of weighting. The following table shows the unweighted sample sizes and the error attributable to sampling that would be expected at the 95% level of confidence for different groups in the survey: