The holiday shopping spree kicked off early this year as large retailers like Wal-Mart and Target started offering online deals many weeks before Thanksgiving weekend. For brick-and-mortar shoppers, some stores will even extend their Black Friday hours into Thanksgiving Day. That’s both good news and bad news for many Americans, as attitudes about holiday shopping can be quite polarizing. 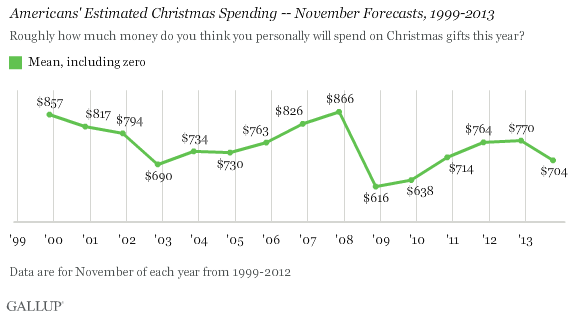 While 37% of Americans plan to spend less on gifts this year, 10% plan on spending more. This year’s average Christmas shopper plans on spending $704, down from the $770 they planned to spend around this time last year, according to Gallup. Looking back to 1999, the largest amount that Americans planned to spend on Christmas gifts was $866 in 2007, before the nation was hit with the financial crisis. The smallest amount was $616 during the 2008 recession, a year later.

Holiday shopping is also becoming more digital. Despite media coverage of people waiting up all night to score big Black Friday discounts, only 13% of consumers plan to shop in physical stores this Black Friday, according to Nielsen, down from 17% in 2012. Meanwhile, 46% of consumers say they will shop online on Cyber Monday – using computers (88%), tablets (37%) and cell phones (27%), an increase compared with 30% in 2012.