Are you Hispanic or Latino? It’s a question Hispanics and non-Hispanics alike have struggled with when deciding what to call the diverse community of 53 million Americans who trace their roots to Latin America or to Spain. Officially, both terms are used by the U.S. federal government to describe this population, and many organizations, including the Pew Research Center’s Hispanic Trends Project, use the terms interchangeably in publications.

However, among Hispanics themselves, many are ambivalent about the two terms. According to a new Pew Research Center survey of Hispanic adults, half (50%) say they have no preference for either term. But among those who do have a preference, “Hispanic” is preferred over “Latino” by a ratio of about 2-1.

But there’s one striking exception: Texas. 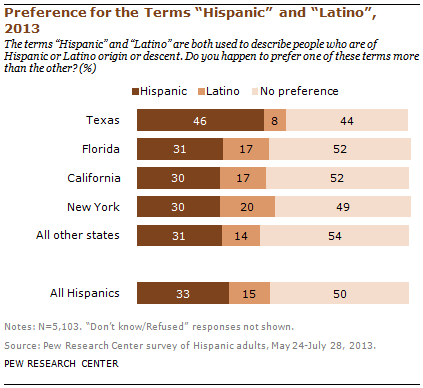 This pattern is different from that of Latinos in other parts of the country. For example, in California, the state with the largest Hispanic population, 30% say they prefer “Hispanic” and 17% say they prefer the term “Latino.” In Florida, results are similar—31% prefer “Hispanic” and 17% prefer “Latino.” The pattern for New York and all other states is nearly the same.

Of course, Latinos also have several other terms at their disposal to describe their identity—and these are often preferred over “Hispanic” or “Latino.” When asked which term they use most often to describe themselves, 54% use Hispanic origin terms such as Mexican, Cuban, or Dominican and 23% say they use the term American. Another 20% say they use the more broad terms, either “Hispanic” or “Latino.”

It turns out this is true of Hispanics in Texas as well: about half (47%) say that they most often use their Hispanic origin term to describe themselves, 30% use the term “American,” and 21% use the pan-ethnic terms “Hispanic” or “Latino” most often to describe their identity.