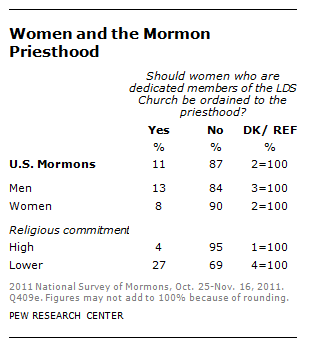 Leaders of the Church of Jesus Christ of Latter-day Saints (also known as the Mormon Church)  reaffirmed their position that women should not be eligible for the priesthood this past weekend at the semiannual General Conference in Salt Lake City.

The Mormon priesthood is different than the priesthood in some other faiths. All worthy male members of the church are eligible to begin priesthood service when they reach age 12, and men may hold various offices in the priesthood – such as deacon, teacher, priest, elder or high priest – at different stages in their lives.

A group of women reportedly attempted to gain entry to last weekend’s all-male priesthood session, but they were not allowed in. “Most church members would see such efforts as divisive,” LDS Church spokeswoman Ruth Todd said in a statement, according to The Salt Lake Tribune.

A 2011 Pew Research Center survey found that most U.S. Mormons oppose the idea of female membership in the priesthood. Asked whether women who are dedicated members of the LDS Church should be ordained to the priesthood, 87% of U.S. Mormons said no, while 11% said yes.

Mormon women are somewhat more likely than men to oppose the idea of women in the priesthood. Fully nine-in-ten Mormon women (90%) say women should not be ordained, compared with 84% of Mormon men.