Israel defines itself as a Jewish state, and most Jews in the United States say that emotionally they are either very attached (30%) or somewhat attached (39%) to Israel. But on some measures, Jews’ feelings for Israel are equaled or even exceeded by those of white evangelical Protestants. 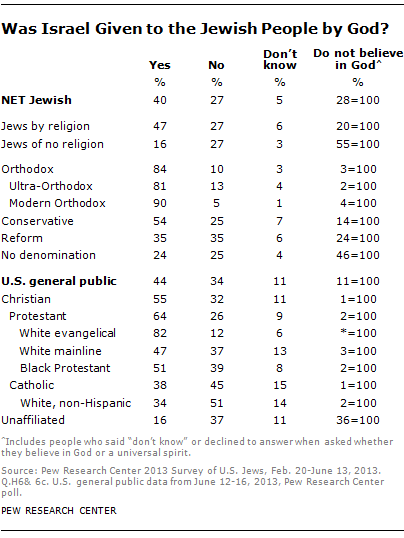 For example, twice as many white evangelical Protestants as Jews say that Israel was given to the Jewish people by God (82% vs. 40%). Some of the discrepancy is attributable to Jews’ lower levels of belief in God overall; virtually all evangelicals say they believe in God, compared with 72% of Jews (23% say they do not believe in God and 5% say they don’t know or decline to answer the question). But even Jews who do believe in God are less likely than evangelicals to believe that God gave the land that is now Israel to the Jewish people (55% vs. 82%).

White evangelical Protestants are less optimistic than Jews about the prospects for a peaceful two-state solution to conflict in the region. When asked if there is a way for Israel and an independent Palestinian state to coexist peacefully, six-in-ten American Jews (61%) say yes, while one-third say no. Among white evangelical Protestants, 42% say Israel and an independent Palestinian state can coexist peacefully, while 50% say this is not possible.