Recent polls in Germany show Chancellor Angela Merkel leading in her bid for reelection on September 22. 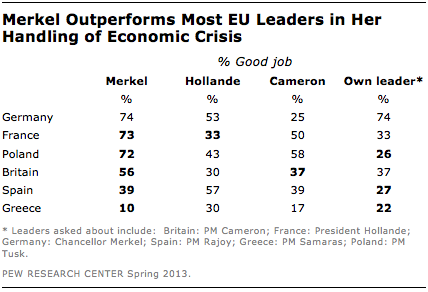 Roughly three-in-four Germans (74%) think Merkel has done a good job dealing with the euro crisis, according to a March 2013 Pew Research Center survey. This may be one reason she leads her chief rival Social Democratic chancellor candidate Peer Steinbrück.

In other European countries, Merkel also gets high marks for her handling of the crisis, except for those that have been hard hit with austerity measures. In France, 73% of the public says she has done a good job handling the region’s economic troubles, far more than the 33% of the French who laud their President Francois Hollande for his economic management.

Roughly seven-in-ten Poles (72%) approve of Merkel’s handling of the economy, while only 26% think their Prime Minister Donald Tusk has done a good job. And even 56% of the British give Merkel high marks in economics, a much better grade than they give their own Prime Minister David Cameron (37%).

However, not everyone in Europe admires Merkel’s economic record, particularly in parts of southern Europe where some populations feel Germany has imposed austerity upon them and not helped them enough in their time of trouble. Just 39% of the Spanish think Merkel has done a good job handling the European economic crisis. While that is a higher grade than they accord their own leader Mariano Rajoy (27%), the Spanish are far more appreciative of the economic policies of French President Hollande (57%).

But anti-Merkel sentiment is strongest in Greece, where just 10% approve of her handling of economic problems. Hollande (30%), Greek Prime Minister Antonis Samaras (22%) and Cameron (17%) are all held in higher regard.