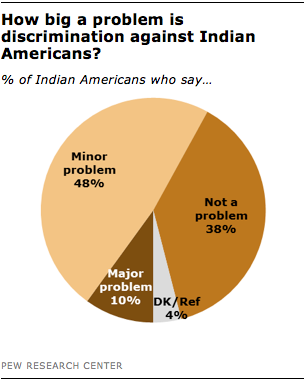 This past weekend, for the first time in its history, the Miss America pageant crowned an Indian American as the winner. The announcement was followed by a barrage of tweets disparaging the beauty queen’s ethnic heritage and questioning whether her Indian background makes her less “American.”

The new Miss America is 24-year-old Nina Davuluri of Fayetteville, N.Y. Her parents emigrated from India 30 years ago. Davuluri, who is a graduate of the University of Michigan, plans to attend medical school and become a physician, like her father.

The Indian American community, now numbering more than 3 million, has notably high rates of education. According to the American Community Survey, seven-in-ten Indian Americans ages 25 and older have a college degree, compared with 28% of the general population. A Pew Research Center survey of Asian Americans conducted in 2012 found that a majority of first-generation (foreign-born) Indian Americans (71%) cite educational or economic opportunities as the main reason they decided to move to the United States.